First off, tip of the hat to Steve Lepore from KK for offering this info: tonight's Versus telecast will be called by John Ahlers, John Vanbiesbrouck, and Jack Edwards. I remember when I first heard about Ahlers, the Ducks' regular play-by-play guy, getting a Versus gig. Somebody had started a thread at a Ducks messageboards in all caps: "AHLERS ON VERSUS!!!"

When I first saw the thread title, I thought, "Hey, that's really cool. I never pay attention to the AHL because it's never televised down here. Finally, some AHLers on Versus!" Boy was I suckered. 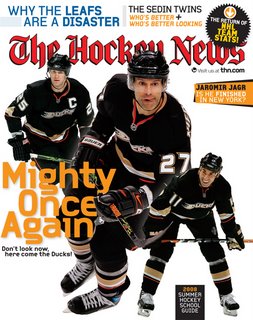 Oops. The Hockey News will have to do a new cover with Selanne now.

At any rate, Ducks play Minnesota tonight for the last time this season, and in some ways, the Wild may be getting lucky. They managed to play the Ducks the last game before Scott Niedermayer made his debut, and the way things are looking they might be playing the last game before Teemu Selanne reassumes his #8. Of course, Wild fans hate the Ducks, and tough to blame them. Twice they've made the playoffs, and twice the Ducks have soundly beaten them.

This may sound hollow (and maybe on some level it is), but I do sympathize. You see, the first two times the Ducks made the playoffs, they met their demise at the hands of their archnemesis, the Red Wings. Detroit swept Anaheim in the second round of the 1997 playoffs and again in the first round of the 1999 playoffs. Two playoff appearances, two brutal deaths at the hands of the Red Wings.

So I guess the message I've got for Wild fans is that there is hope (and for Ducks fans, there is worry). Sure, now that the Ducks have added Selanne a lot of experts have been calling them favorites, and on paper, there's a lot to support that. Still, history offers a lesson that to my eye is way too parallel to ignore: 2003 playoffs, first round, Red Wings vs. Mighty Ducks. Detroit came in as the defending Stanley Cup champs with a history of beating the shit out of the Ducks (sound familiar?), and dressed a roster loaded with superstars (good enough to lead the league in scoring).

So what happened in this parallel tale? Another sweep, except of course this time things were different; this time the Ducks came out winners. Even though Detroit was the better team nearly every minute of that series, Giguere and the Ducks willed their way to a tight victory. And another. And two more. Four one-goal wins against a team that hadn't lost even three straight all season. Three years later, the Ducks eliminated Detroit again, evening the franchise score.

Of course, both Wing eliminations were made all the sweeter by the previous history, but here's the question: Could the Mighty Ducks of '03 have beaten that Red Wings squad if it didn't have that history of losing? Was there extra incentive for Anaheim, enough to will those wins? Was it a case of karmic due?

It's never that simple, of course (Giguere is a huge wrinkle in the bitterness theory), but the fact remains: I am very, very afraid of that eventual next series against Minnesota, whenever it occurs. Sure the Wild have been humiliated in the past and I've certainly enjoyed our end of that, but having seen both sides of the equation, I don't know if any team is as emotionally ready to overthrow the Ducks in a best-of-seven as the Wild are. And I don't think any team, even twice-beaten Detroit, is as due.

Prediction: This could be the Ducks' last game with an all-North-American lineup. I don't expect Selanne to play, and I guess Pahlsson's not up to snuff either. The Wild will be ready to battle, so let's hope the Ducks are, too. Ducks 3, Wild 1. Goals by Getzlaf, Marchant, and Beauchemin.