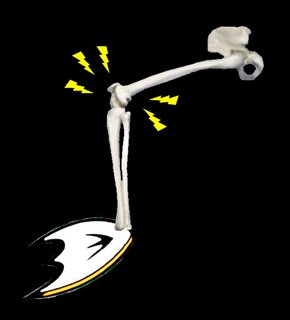 Last year when Chris Pronger broke his foot, I produced an exclusive x-ray photo of the injury. Cut to last night's game in the first period at Nashville, when a Shea Weber point shot hit the outside of Pronger's knee; he left the game, apparently suffering a contusion and is day-to-day.

So, without further ado, to the right is the x-ray I received of the current injury. You can see the extent of the injury by the excessive number of lightning bolts.

On that note, it's probably appropriate that the Ducks go to Minnesota tonight, a regular source for injuries as I noted in last spring's series preview. Between the regular season and playoffs, Ducks-Wild games in the last season-and-a-half have produced the following injuries:
We'll see what happens tonight. One thing to watch out for -- this will be Brad May's first game in Minnesota since the Johnsson suckerpunch. May already fought Boogaard in Anaheim, but I have a feeling he might have to answer the bell again in front of the Wild fans.

Prediction: The Wild have already beaten the Ducks twice in Anaheim this year, the last win coming on the game before Niedermayer's return. If there's any solace, it's that the Wild scored the first seven goals in the season series, but the Ducks have scored the last two (to be fair, that game was well out-of-hand, so this isn't that encouraging). Still, the Ducks are rolling, and I'm believing. Ducks 4, Wild 3. Goals by Kunitz, Weight, Pahlsson, and Beauchemin.