So even passing readers should know that I have an unhealthy addiction to Sammy Pahlsson. From poetry to trophy talk to analysis to fantasy fun to putting him in every game prediction, I think I've made clear my position: Pahlsson is god. 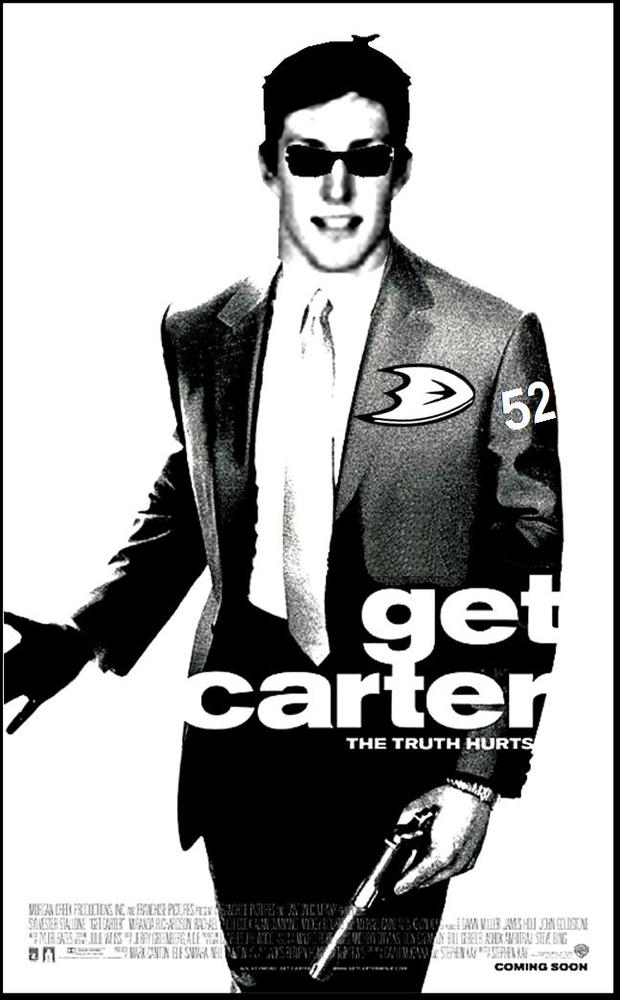 So of course I'm going to be a little reticent to acknowledge when some kid comes and plays the murderer's minutes, and does it capably. Of course I'm glad it's been working out for the point-desperate Ducks, but if Ryan Carter can be a shutdown wizard in Pahlsson's absence, it takes a bit of the luster off the SuperSwede.

Grudgingly, I'll hand it to Carter, though; he's worked himself in nicely on the stopper line between Travis "the omen" Moen and Fun Bobby Niedermayer. In the last three games, he has averaged more than 13 even-strength minutes a game, fulfilling all the necessary Pahlsson functions: One tendency I particularly like out of Carter (because it's something I notice also in Pahlsson's game) is his willingness to shoot the puck immediately in nearly every circumstance. It's not necessarily a play that results in a goal-for, usually, but rather it's almost a defensive mechanism. It reduces the risk of a turnover, while forcing opponents to start from their own net.

In 10 games since Carter's most recent call-up, he's played 87 even-strength minutes with an even goal-differential, plus-2 and minus-2. He's also spent some 3 shorthanded minutes without a goal-against. It's impressive work from a kid now filling in one of the tougher set of skates in the league; hopefully he can keep it going while Sammy's down.

He's still not in Sammy territory yet, though. Pahlsson this season has averaged those same thirteen difficult minutes, plus he throws in nearly five minutes a game on the penalty-kill as well; Carter thus far has only done the even-strength work. And if Carter wants a really lofty goal, he can try to mirror Pahlsson's playoff results, where he went plus-17 and minus-8 (a ratio of more than 2-to-1!) at even-strength against some of the toughest top lines in the playoffs. Oh, and he led all postseason skaters in penalty-killing time, hits, and faceoff wins, too.

Anyways, the Maple Leafs roll into town for the first time in more than 50 months, but who's counting? I was looking over the game roster of that last visit in 2003:

For a Toronto angle on things, check out Pension Plan Puppets or Battle of Ontario (not just for gloating at Senator fans anymore!).

Prediction: The Ducks that played in the 2nd period against Nashville is a scary bunch, and you might think that they are set to wipe out the Leafs, but I'm not sure. I'm thinking that Toronto is starting to realize that it will be a long time until they can actually beat their rival Senators, and the next-best thing may be to beat the team that beat Ottawa. Still, the webbed ones carry the day: Ducks 4, Leafs 3. Goals by Getzlaf, Niedermayer (I don't care which one), Pahlsson, and Bochenski. If Pahlsson is still injured, Carter can feel free to substitute his first career goal anytime he's ready.