This summer, I took a graphical look at leaguewide scoring, week-by-week, since the league came back with its rule changes. Seeing as this season is past its halfway point, I thought I'd update that graph.

Essentially, all I've done is group games by week; each week represents roughly 45 games. For each week, I've averaged the total goals scored per game, the total power play goals scored per game, and the power play opportunites per game. All are plotted below with a straight-line trend, but as before, I've divided the PP opportunities by six; this approximates the PP conversion rate fairly well. This time I've added an extra green line—the non-PP goals. This is really the difference between the red and blue points, but I think it's worth seeing on its own. 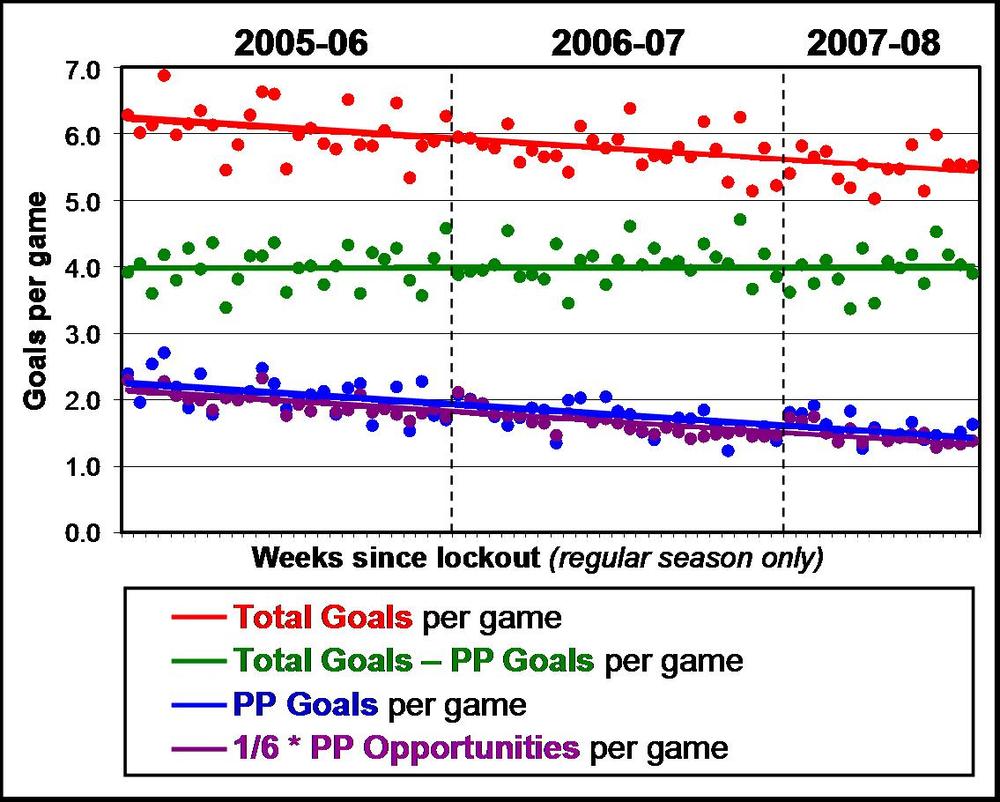 Really there's two main things I want to point out:

Anyways, I don't really know why I decided to pursue that topic instead of focusing on tonight's game against the Red Wings. Since Scott Niedermayer's return on December 16th, Detroit's the only team that has picked up more standings points than the Ducks, and in that regard, it should be a good matchup between titans-of-late.

In fact, there are lots of posts I need to write: how Bertuzzi became worthy of his salary, does this team need Teemu?, the surprising All-Star selection of Scott Niedermayer (to go with Pronger, Getzlaf, and Perry), the big contract extension signed by Ilya Bryzgalov, and I also wanted to link to a nice Mirtle interview that PJ did.

But that's what's odd about old Earl, I guess. A match-up with two top teams in the west with a relevant playoff history and tons of available storylines, and I get caught up in league scoring charts instead. Oh well; comment on whatever topic you want in the comments.

Prediction: The Ducks have taken 3 of 4 points against Detroit early this season, but a huge factor in each game was a crazy Russian named Bryzgalov. Of course the Ducks have improved a great deal since October, but it's still tough to tell where they stack up against the Wings, who've murdered the west despite injuries on their roster. I still get the sense that for the Ducks to win a lot of things have to go right, and fortunately, that's what happens tonight. Ducks 4, Red Wings 1. Goals by Rob Niedermayer, Bertuzzi, Weight, and Perry.