Since the Ducks acquired Chris Pronger in the summer of 2006, they have played a total of 150 games -- 129 regular season plus 21 playoffs. In the 95 games that have featured both Scott Niedermayer and Chris Pronger, they are 45 games above .500. In the 55 games that have only featured one of them, they are 2 games above .500. Of course there are some factors to consider (Pronger missed time while Giguere and Beauchemin were injured, and Scott missed the whole hangover thing), but still the record when both are available is impressive: 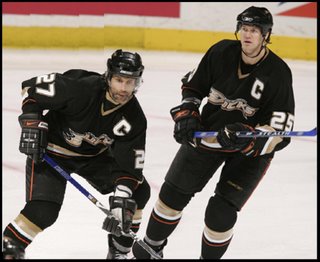 The Stars come to town tonight having outscored the Niedermayerless Ducks a combined 10-2 in the first three meetings of the year; the Ducks haven't scored an even-strength goal in the season series yet. Still, the Ducks have gone 6-0-1 over their last seven home games, and are making early season issues seem pretty distant.

And with winning ways comes luck. As cheesy as Weight's tying goal was off Semenov's foot, you know what it reminded me of? A late-game, cheesy tying goal in G5 against Detroit off Lidstrom's shaft. Bounces and breaks come and go, but it's nice to have 'em hit you in key moments.

Prediction: This game ends a favorable stretch in the schedule. After tonight, the Ducks will play 12 of 13 on the road, with only a home date with the Red Wings to break the madness. Ducks 3, Stars 1. Goals by Schneider, Getzlaf, and Moen. Pahlsson probably won't play, but he still scores in spirit.