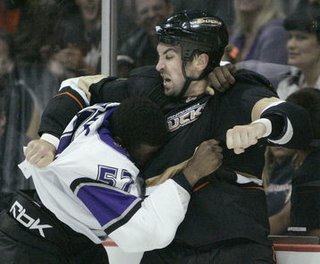 To Boston: D Shane Hnidy and a 6th-round pick

While there are some salary cap and tag implications created by this move, I think the gains are pretty small. Basically, this is a trade to get a guy who could crack Anaheim's lineup for a guy who probably could not.

The thing about Hnidymayer is that he's fairly frustrating to watch on defense; one second you think that he's in good position to defend a play, the next second he's got his arm wrapped around some forward begging the referees for a holding call.

Still, there's a lesson to be learned about Hnidy: he's not going to be a good top-four option on defense, but he can be a capable bottom-pairing guy. In Hnidy's first seventeen games for Anaheim (played largely without Mathieu Schneider or of course Scott Niedermayer), Shane played some 214 minutes of even-strength hockey, on the ice for 2 goals-for, 9 goals-against. Additionally, he played some 28 minutes shorthanded, on the ice for 3 goals-against there. Basically, he was a bleeder.

In his most recent sixteen games, though, with an available Schneider, Hnidy has found a way to be more effective in lesser minutes: in 177 even-strength minutes, Hnidy was on the ice for 9 goals-for and only 1 goal-against. In 12 shorthanded minutes, the opposition power play went scoreless.

I think some of this shift-in-results has to do with on-ice adjustments; Hnidy had to figure out his role on the Anaheim blueline and play towards that. Also, though, there's a lesson about adding personnel to a roster: when you add top talent to the top of your roster, it allows secondary players to fall into more appropriate roles. Boston may have gotten themselves a useful defenseman in this trade, but it probably depends on who they've got playing in front of him.

I can't say very much about Bochenski yet, but going on the basis of balance, the re-Niedermayered Ducks are in more need of a secondary scoring forward than they are another sixth defenseman. Kudos to Brian Burke for negotiating this trade in a basically no-trade environment.
===================================

As an aside, you might recall that I am technically a blogger for AOL Fanhouse, though I haven't really written anything there in a month-plus. Part of that is obviously laziness, though workplace firewall developments have made it near-impossible to contribute during the workday; I'm banned from viewing that site or recently, even BoC and other Blogger sites, from my work computer. I apologize if I'm slow responding to comments during the day, or even if I miss a gameday post (like yesterday), but I'm looking into some solutions for that.

In the meantime, though, I've agreed to pick it up a bit, now in the form of a weekly cartoon. Every Thursday at 11 am (Pacific) I'll be putting something new up, usually scheduled to be posted the night before. You can check out my first PuckToon about the NHL Winter Classic, though it won't be visible until its publish time today.