Hey, Anze Kopitar made the All-Star team! Congratulations to Kopitar on the 1st of his many, many All-Star games. He is the only representative of the Kings which, let's face it, is entirely appropriate. I haven't written as much about Kopitar as I'd like* because I run the risk of making everyone sick, but he has been better than he was last year when you consider that every team is gunning for him. Good for him. 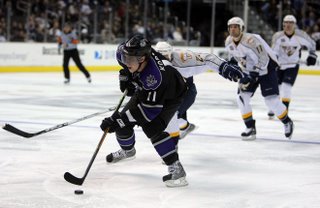 Also making the squad from California: Ryan Getzlaf, Chris Pronger, Evgeni Nabokov, and Joe Thornton. I encourage the All-Star coach (who the hell coaches these things again?) to put Getzlaf, Kopitar, and Stastny on a line. I guarantee three goals or your money back. (Give me money and I'll prove it.)

Not making the team: Pascal Leclaire. Instead, Manny Legace will join Nabokov and Luongo for the All-Star festivities. I know statistics like Goals Against Average and Save Percentage are flawed, but is better in both, plus he has played on a shittier team, plus he does all this with fake vampire teeth in his mouth. I'm not a Columbus blogger or anything, but that seems ridiculous to me.

The L.A. Times finally let Helene Elliot write about hockey again, and she came with guns blazing in this article about the state of the Kings. It's thesis is that it's time to bring up Purcell, Boyle, and Harrold and see what they can do since there's no way the Kings are making the playoffs. I agree with her because Purcell is 22, Boyle is 23 (although I'm not sure if he deserves a call-up), and Harrold is 24; they're all older than Anze Kopitar. If he can handle all this losing, I think they can as well.

I do take issue with one part of Elliot's article, however:


"...another broken promise from a club that vowed it would become a Stanley Cup contender under the salary-cap system but sabotaged itself with bad free-agent signings and timidity in the front office."

I don't understand why the Kings broke some "vow" because they have sucked the last two seasons. Were they supposed to say they would suck and wouldn't be competitive for a while? And how can you sabotage yourself with bad free-agent signings and timidity in the front office. It seems like a lack of timidity resulted in bad free-agent signings. And really, what free-agent signings have been bad? Brian Willsie was, but I'm not really ready to classify anyone else as such. Craig Conroy, Pavol Demitra, Tom Preissing, Ted Purcell, Joe Piskula... those all seem like pretty good signings to me. (I'm still withholding judgment on Michal Handzus.)

I don't know if I like this perception growing among Kings fans that we somehow deserve a competitive team because we've never won a championship. The team we're playing tonight has suffered as long and they're the capital of Ontario! I think we're in danger of becoming as insufferable as Red Sox fans if we're not careful, and I'd rather die than be a part of something like that.

Prediction: Kings win, 6-3. Kopitar celebrates his selection with a hat trick, while Frolov, Willsie, and Handzus also get in on the act.


^I thought we'd be able to access it through the Maple Leafs website, but I guess you have to be in Canada to use it. Looks like it's the radio tonight for us.

*If I had my way, every article would look like this: