Share All sharing options for: Kings Gameday: Don't Feel Bad if the Kings Beat Your Team

One annoying thing about being the worst team in the league: you never beat someone. Every time the Kings win, fans of the other team will decry their team’s lack of effort, or complain that the team was caught looking ahead, or some other gibberish. Just think about it: the Kings have already cost one GM his job, the Maple Leafs started looking for a change after losing to the Kings, and this article was written after the Oilers got their asses handed to them. It gets kind of frustrating. 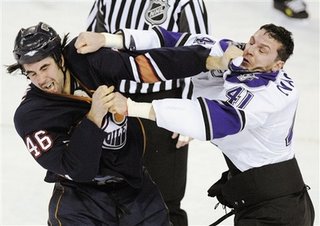 Look, I get why it happens. People look at the standings, see the Kings are in last place, and just assume their team will win; when they don’t, it must be because they didn’t try hard enough. But the Kings aren’t your typical last place team, at least in my opinion. Sure, we’ve lost 7-0 to , but the Kings have also blown out a few teams. They’re inconsistent, but if everything is clicking the Kings can be a pretty devastating team. Some times you’re going to lose to them, but other times you’ll roll over them easily. That’s just how it goes. Against , Dustin Brown and Lubomir Visnovsky both scored and Anze Kopitar had 2 assists. It wasn’t a fluke that the Kings beat ; the fluke is that they haven't done that more often.

Something kind of cool: I was listening to the game on the radio and Nick Nickson said, "Now Handzus’ line is heading out on the ice." I knew exactly who he was talking about. That hasn’t happened very often this season.

Where does Cammalleri play when he gets back?

1) Cammalleri resumes playing with Kopitar and Brown, while O’Sullivan plays with Handzus and Calder. Purcell is sent back down.

2) O’Sullivan centers a line with Frolov and Nagy while Cammalleri plays with Kopitar.

3) Cammalleri centers a line with Frolov and Nagy.

I’m not sure what the best solution is to this little quandary. I’d like to see Cammy with Frolov and Nagy, but I’m not quite sure if Cammy can still play center. I think having your best players play together is a good idea (Armstrong can center the 4th line, where he’s actually above average), but we’ll have to see what Crawford thinks. It should be interesting.