Kings Gameday: The Kings Would Make the Playoffs in the Eastern Conference

Share All sharing options for: Kings Gameday: The Kings Would Make the Playoffs in the Eastern Conference


(Note: This is not me being facetious, although I do make a few jokes. I am 100% convinced this is true.)
The Kings would definitely make the playoffs if they played in the Eastern Conference. They’ve played 3 Eastern Conference teams this season: in those games, they’ve scored 6, 8, and 5 goals. They just match up a lot better with teams like than they do against teams like . All this tough defense, gritty play in the corners that's popular in the West (you know, hockey) is not the Kings’ game. We need to be amongst teams that forget to cover the trailing defenseman, like they do in Eastern Conference. Overall, there’s a few reasons I think the Kings would do much better in the East, and I’ll give them too you in handy bullet form so you can skim (you fuckers are lazy):

- Kopitar. Anze Kopitar is a rare beast in the NHL, with a rare game that can be difficult to defend. Teams in the Pacific (especially Phoenix, oddly enough) have figured out the best way to defend him, but teams in the East who are experiencing him for the first time don’t know what’s going on. "Wait, why is he going behind the net? That doesn’t make se- oh shit, how did he do that!" In the 3 games we’ve played against the East, Kopitar has 7 points. Does that mean that if the Kings played 72 games in the Eastern Conference then Kopitar would score 168 points? Yep, guaranteed.

-Defense. The Kings don’t play any. Right now they’re getting killed in the goals allowed department (hey, they’re only tied for last) because they’re turning the puck over in the neutral zone. This is because of the tight team defense played in the Western Conference. If the Kings played in the East, this wouldn’t happen and everyone would be happy. Well, I guess just me, but I’ll settle for that.

-General Shittiness. Personally, I feel the East is far inferior to the West. (We just don’t notice it as much as in other sports because the two sides barely play each other.) Look at Ottawa last year: they were dominant, cruised through the Eastern playoffs, and then got butt-fucked on national television by the Ducks. The Kings are in last place in the NHL, but look who they have to play 8 times a season: the Ducks (the scariest team in the NHL if Selanne comes back, and maybe even if he doesn't), the Sharks (if only we could play them in the playoffs!), the Stars (honestly, it’s fucking magic, there’s no other reason they’re still this good), and even the Coyotes have been playing excellent hockey of late. How the fuck are the Kings supposed to win when they’re playing those teams? In contrast, look at the second worst team in hockey, the Tampa Bay Lightning: they play (two games above .500!), (two games below), (one game below), and (two games below). Put the Kings in that division and I’m pretty sure they can win the fucking thing. 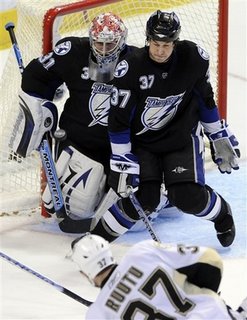 C'mon, they can't even figure out which one is supposed to play goalie!

Let’s see if we can make this happen, Bettman. The Kings have been a solid franchise, we’ve paid our dues, now let’s get some kind of reward: move us to the Eastern Conference and let us make the Stanley Cup finals, where we'd get our asses kicked by a team like Dallas. I’d settle for that.

(Also, not to whine or anything, but because I missed their little winning streak and the last game because it was on the radio, I haven't seen the Kings win a full month. Awesome.)