(We've been busy recently, so make sure you check out the posts on shitty commercials and all the Teemu stuff from yesterday.)

While the Kings have been relaxing and taking a much-needed break from the long grind of the season, the Manchester Monarchs have been embroiled in one controversy after another. This gives me a flimsy pretext to showcase my unhealthy knowledge of Beverly Hills 90210. Hey, I have an older sister, give me a break.

First, Petr Kanko was arrested last Wednesday for getting all Ray Pruit on his wife. Specifically, I guess he allegedly pinned her up against a wall by her neck after a disagreement over an upcoming vacation. The best part? He played the same day he was arrested. (At least he scored?) Hey, it’s better than when Joe Corvo punched that chick in a bar and then kicked her in the stomach while she was on the ground; he got promoted.

Of course, this may come as no surprise to those who have seen a picture of Petr Kanko: 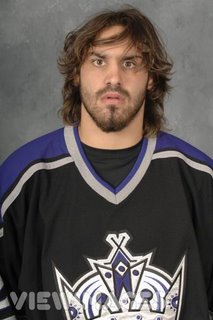 I mean, c’mon, look at him! He looks like the Wolfman meets serial killer. They should cut out the middle man and just put him in prison right now. Save some time, you know? (I love the guy in the comments of that article who says, "What about Mrs. Kanko hitting Petr?" That’s what I’m worried about too.)

Finally, Daniel Taylor, a British goaltender who was toiling in the ECHL, got called up to Manchester due to injuries and quickly became a fan favorite. In 11 games he posted a GAA of 1.90 and a save percentage of .939. He had 3 straight shutouts and was 33 minutes, 47 seconds away from setting the franchise record for shutout play. Everyone was really excited… and then they started Dan Cloutier. What did Dan Cloutier do? He let in 2 goals on his first 3 shots.* The opposing team only had 16 shots on the night (and none in the 3rd period), but ended up losing, 3-2. My favorite part? This quote by Cloutier:

(About letting in 2 of the first 3 shots on goal): "Weird, not the way you want to start your comeback," said Cloutier. "But we found a way to battle back."

Really, Dan? It was "weird" that you let in the first few shots you faced? Funny, because I seem to remember it happening a lot last year. Maybe you’ll be able to stop those in the ECHL. Ruin another franchise’s hopes and dreams. I tried to come up with a 90210 equivalent to you, but I couldn’t. The nearest thing I could come up with was this: your goaltending career is about as successful as Brian Austin Green’s musical career. (Don’t worry, my sister will think that’s harsh.)

The Kings begin an 8-game road trip tonight in against the Flyers. (Like they’re going to play the Devils?) I said earlier that the Kings would make the playoffs if they played in the Eastern Conference, so now they have a chance to make me look like a jackass by losing their next 4 games. Tonight’s game also reunites Jack Johnson and Steve Downie; Johnson, of course, infamously elbowed Downie in the head during the 2006 World Juniors and faced the wrath of a thousand angry Canadians. Now it’s been revealed that Downie is a huge douche bag and probably deserved it. Johnson will accept your apology any time, .

Prediction: Kings win, 5-4. Goals by Kopitar, Frolov (x2), O’Sullivan, and Purcell (assuming he gets called up).

*If I wanted to be fair I’d point out that the first goal was on a 5-on-3, but since Cloutier pretty much ruined my life last year I say fuck ‘im.