Share All sharing options for: Kings Gameday: That Seemed Pointless

Last year the New York Islanders were fighting for the eighth and final playoff spot in the Eastern Conference. In order to secure that spot, they traded Robert Nilsson, Ryan O'Marra, and their first round draft pick to the Edmonton Oilers for Ryan Smyth. Smyth did help them get into the playoffs, scoring 15 points in his 18 games. The Islanders were defeated in the first round by the top-ranked Buffalo Sabres and then watched as Smyth signed a long-term deal with the Colorado Avalanche. This season, 22-year old Robert Nilsson has tallied 22 points with the Oilers, 20-year old Ryan O'Marra is playing in the AHL, and their first round draft pick (defenseman Alex Plante) is playing significant minutes for the Calgary Hitmen of the WHL. The Islanders? They're currently in 8th place, fighting for a playoff spot. 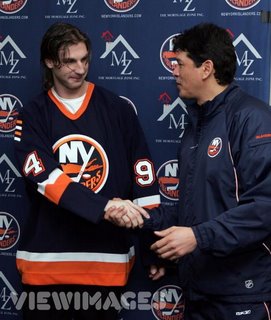 
Now, my question to you is: what the fuck was the point of trading for Ryan Smyth? Did he promise to sign with the Islanders, only to renege? Because otherwise I honestly can't understand why they'd mortgage a good part of their future for the right to get their asses kicked by Buffalo. Anyone?

Of course, I should point out that the Kings did the exact same thing in 2006, trading Jeff Tambellini and Denis Grebeshkov to the Islanders for Mark Parrish and Brent Sopel in an attempt to make the playoffs. Parrish scored 8 points in 19 games for the Kings before signing with Minnesota in the off-season, while Sopel played admirably with the Kings for 2 seasons and then was traded last season for the draft pick that would eventually become Wayne Simmonds. Tambellini looks like a bust (he hasn't caught on in New York at the age of 23), while Grebeshkov is currently playing in Edmonton. 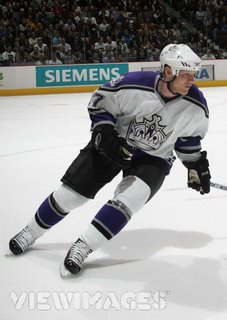 The trade ended up not hurting the Kings (Simmonds could end up being the best player out of everyone), but that doesn't mean it was a good idea. I see the merits of a team like Detroit or Dallas making a deadline deal, but what's the point of making these deals just to get into the playoffs? Sure, they work occasionally (Edmonton in 2006), but most of the time it just ends up closing a team's window of opportunity too early.


(Wait, does me saying this reduce the number of suitors for Blake and Nagy? Umm, nevermind, the Rangers should definitely try to get Blake.)


I can't find the link now (someone want to help me out?) [SLEEK EDIT: Here ya go, pal.], but yesterday there was a Canadian columnist that proposed a bunch of trades he thinks should happen. Among them: Devin Setoguchi and a 1st round pick for Rob Blake and Ladislav Nagy. I would just like to say that I wholeheartedly support this trade. Make it happen, Doug!


Prediction: Have the Kings been playing good hockey lately? I actually think so. Kings win, 4-2. Goals by Frolov, Handzus, Blake and Brown.