Kings Gameday: This Game is Not Important

Share All sharing options for: Kings Gameday: This Game is Not Important

The Kings have always had a little history with the Nashville Predators; it’s never just another game when they play. I don’t know why, maybe it just feels that way because Nashville's roster is filled with douche bags, but I remember both previous games perfectly.


The first was a 6-0 Kings thumping, with Nagy leading the way on a 3-point night. Mike Cammalleri also contributed with 2 goals on the year. That was the game where Derek Armstrong might a great play to get behind the defenseman and then made a no-look pass to Raitis Ivanans, who buried it. No, I’m not making that up; that actually happened. The Kings used the game as a springboard to a 3-game winning streak, and it seemed obvious that they had recovered from their early season slump. 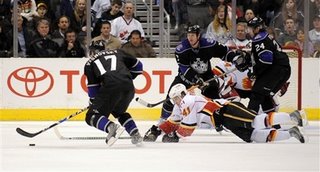 Lubo, in a rare instant where he's not turning the puck over.

The second was a 4-3 Kings loss, thanks to Jason Arnott. This loss was the 7th loss in their 8-game losing streak, and was definitely one of the most frustrating. (Getting your ass kicked by Jason Arnott? Really?) Patrick O’Sullivan had a great game, scoring 2 goals, and we saw a little vintage Lubo as he rifled a shot over Dan Ellis’ shoulder. Still, it was a game I felt the Kings should have won, but they didn’t because their incompetent. This was also the game where Mike Cammalleri got into a "fight" and injured his ribs. Way to go, jackass. 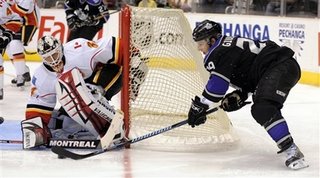 Giuliano has been watching Frolov play too much.

Now the Kings have lost 2 in a row right on the heels of a 3-game winning streak. Their last 2 games haven’t felt bad though, and the Kings could have won either one. I guess that’s better than just getting your ass kicked. The Predators will be without Shea Weber and Steve Sullivan and had their own modest 3-game winning streak snapped by those dastardly Ducks. It’s one of those games that doesn’t really matter in the larger scope of the NHL, but it’s still important for the Kings. They can get themselves up for a big game and play with anyone; it’s these little games that they can’t seem to win. Hopefully they will tonight. Prediction: Kings win, 5-3. Goals by Brown (x2), Stuart, Nagy, and O’Sullivan. There’s at least 2 fights and Brown destroys someone.