Kings Gameday: What Can Corey Perry Expect to Make?

Share All sharing options for: Kings Gameday: What Can Corey Perry Expect to Make?

Corey Perry is the most prominent restricted free agent in California this off-season (unless San Jose fans are staying up at night worrying about Steve Bernier), so I thought it might be fun to look at how much he might make this off-season. It's way too early to do this (I'm sure Earl will have a much more in-depth look when the season's over), but I wanted to do it because I love shit like this. Probably the best way to go about it would be to find a like player under similar circumstances and see what kind of contract they signed. If only there was a player like that, anyone we could compare to Perry … quiet, Dustin Brown, I’m trying to think… dammit, Dustin, leave me alone! ...wait, come back! 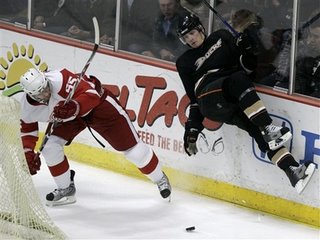 Dustin Brown and Corey Perry are fairly similar players. Don’t believe me? Why not? I wouldn't lie to you. Look, I’ll show you:

Both have played in around 200 games (Brown played in 30 games before the lockout and only tallied 5 points; Perry didn’t make his debut until 2005)

Both have roughly the same breakdown in points this season (Brown has 24 goals to 15 assists, Perry has 26 goals and 16 assists) 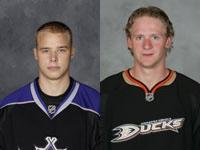 Dustin Brown looks like Spike from Land Before Time.

See, I told you they were similar. If you want to apologize, you can. Of course, there are a few differences. Most obviously, Brown is considered more of a power forward while Perry is characterized as a sniper. (Which seems weird to me, because Brown is a finesse-y power forward while Perry is a physical sniper; doesn't that make them the same?) Dustin Brown also plays on the penalty kill and leads the league in hits by 58 (the gap between him and the 2nd place guy equals the gap between the 2nd place guy and the guy in 23rd.) Plus, Dustin Brown is third in the league in penalty plus/minus behind Sidney Crosby and Anze Kopitar, while Perry has seen his penalty total rise every year. (He’s behind Brad Stuart in penalty plus/minus, if that tells you anything.) Plus, Dustin Brown was an academic player of the year in Juniors and is a great character guy while Corey Perry looks like the dickhead from Salute Your Shorts and is the biggest diver in hockey. But still, they’re pretty similar. 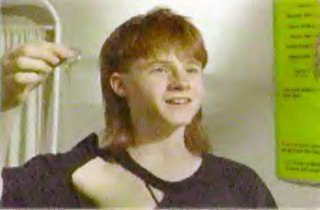 I think Perry should grow his hair like that.


The thing is, most projections for Perry’s salary predict he’ll get a $4 million/year (or more) contract this off-season. I don’t think it’ll be that high. Dustin Brown signed for an average of $3.175 million over 6 years; Perry will get more than that because by all accounts Brown took a discount and Perry has an All-Star selection and Stanley Cup under his belt. But Brian Burke is on record as saying that Ryan Getzlaf is better than Corey Perry and Dustin Penner combined, so I think he’ll be arguing that most of Perry’s value derives from his constant pairing with Getzlaf.

My prediction: I think we’re looking at a 3 or 4-year deal for around $3.5 million a year. That’ll put him below Milan Michalek and Dustin Penner, but above Brown. If he gets more than that I’ll be very disappointed in Brian Burke. Either that, or Perry goes to arbitration and gets dicked over like Mike Cammalleri did. Or, hilariously, someone offers him an offer sheet and the Ducks get fucked for the 2nd year in a row. Please oh please let it be that last one.

Game Prediction: I have a hunch that this is one of those games where the Kings inexplicably play great. Kings win, 4-2. Goals by O’Sullivan, Visnovsky, Moulson, and an empty netter by Brown. (This pretty much guarantees a 7-0 loss.)