Share All sharing options for: Let's Make a Deal 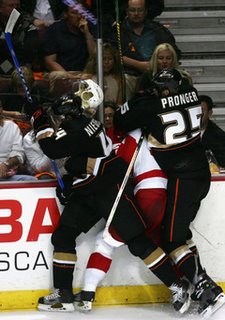 Hey , what’s up? , how’s it hanging? Heatley’s arm, I mean. I’ve been thinking a lot about this upcoming post-season (Yeah, yeah, why would a Kings’ fan worry about the post-season?) and I think you guys could use a little help. I know what you’re thinking, why would the two top teams in the league need help? Well, you see, there’s this team called . You remember them, from last year? Well, I guess Holmstrom doesn’t, but the rest of you probably do. Well, ’s back. They don’t have Selanne (yet), but I’m not sure they even need him. Really, it’s kind of horrifying to watch them; it’s like watching The Bucket List. 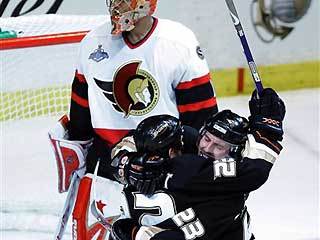 Don’t worry, though; we’re here to help. You see, we Kings’ fans can’t deal with another championship. We want to see someone else win so badly that we’re willing to make one of you guys better. You see, we have this guy. His name is Rob Blake. He’s good. I know Kings’ fans rag on him all the time, but between you and me, most Kings’ fans are idiots. Blake had hip surgery in the off-season and admittedly played like shit the first half of the year, but he’s been playing excellent lately. We all know how important special teams play is in the playoffs, and Blake is one of the best combinations of both power play skill and penalty kill expertise in the league. He would undoubtedly aid you in your quest to not get spanked by again. All it will cost you is this: a first-round draft pick. That’s it. One first-round pick for a combination of meanness and leadership that you won’t find anywhere else. I think we could get more for him, but since he’s just a rental and we’re looking to help, we’ll settle. We could probably trade him to the Rangers or the Penguins and get a better return, but I think you two have the best chance of beating . (Well, San Jose too, but I’ll be fucked if the Kings are the last team in to win a Stanley Cup.) We take a lesser return, you beat . Deal?

[Note: I could see the Kings trading Blake to (it makes too much sense), but I doubt we’d do it for just a first-round pick. Maybe for Greiss...]