Marc Crawford = Jimmy Johnson: an analogy for the ages

Share All sharing options for: Marc Crawford = Jimmy Johnson: an analogy for the ages 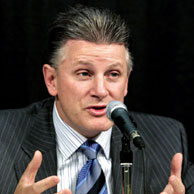 It's funny timing that Rudy Kelly rightfully called for Marc Crawford's heavily jelled head; you see, I had something of a vision today. And, sadly, instead of stumbling on time travel or something sweet like that, I instead think of puzzling and corny sports analogies.

But, at least I'm willing to share my gift/curse with the masses. So here goes:

Marc Crawford needs to acknowledge the fact that he's the NHL's equivalent of former Dallas Cowboys coach and current halftime show star Jimmy Johnson. It will be good for him, good for the NHL's tragically inept Versus coverage and it would certainly help the Los Angeles Kings. A strange thing happened, though, when I started think about Marc Crawford's striking similarities between Jimmy Johnson. 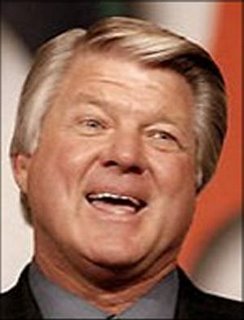 It started off, as much of my humor often does, with weak humor related to a certain characteristic. In this case, it was the comical nature of these guys' hairstyles. Indeed, the most often-used punchline for both coaches involves Dippity Do.

But the analogy goes deeper than that. Look, I'm not saying Crawford will become the next Don Cherry, I'm just saying he'd be a good replacement for Versus's current breathing hair joke, Brian "unironic mullet" Engblom.

This might venture into the realm of insanity. Thought an earnest warning was in order...

How the early 90s Cowboys were the late-90s Colorado Avalanche, or "why booze and cough medicine don't mix."

They both have the aforementioned hair. Both are known for handling the egos of superstars. And...

Both also left behind coaches who won championships, some might say based simply on the fact that they inherited the previous coach's star players. Some might say a charismatic, trained ape could do their jobs. Starting to make sense, now eh? (No, then drink some NyQuil and leave me alone)

The soft-spoken, very likable leader who sticks with the same franchise until the bitter end and is slightly under-appreciated. All Sakic needs is 5 more concussions and a public obsession with WingStop and we've got a perfect match.

I struggled for a bit to make the other two triplets fit, and then I felt like an idiot: of course Foppa equals Irvin. I mean, shit...who else is going to be the fucking Playmaker? Plus, they both have that gritty "willing to go down the middle" attitude and an injury history in Philadelphia.

If only Irvin was a Swede without a spleen and Foppa got caught with groupies and drugs.

Years ago, I would have assumed that Smith was too normal to be associated with the best goalie of the last 25 years. Then I saw the ties he was wearing on ESPN. Now I can totally imagine Smith mocking Thurman Thomas by saying, "I can't hear you...my SuperBowl rings are plugging my ears."

Beyond odd-ball tendencies, the two are an obvious match because they both won 3 championships and broke the all-time records for their given positions.

God, the similarities are everywhere: their greatest competition always came in the form of the conference championships rather than the big games (The San Francisco 49ers = Detroit Red Wings/Dallas Stars); their teams were magnets for bandwagon hoppers...the list goes on and on.

Of course, there are a few hard sells. 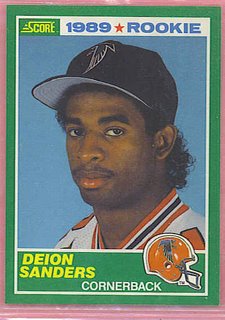 OK, so they were both huge pickups who went after championships once they left bad teams. And, yes, the two defensive players were known as much for their scoring prowess as they were for defense.

But, uh, I kinda doubt anyone will call Bourque "Neon."

Still, Marc Crawford should look over this analogy as resounding proof that he will find a loving, comfortable home in a TV studio. And hockey fans will be happy too.

As long as Howie Long is not involved.