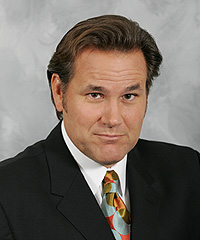 The Montreal Canadiens are clubbing the Boston Bruins like baby seals at the moment, up 6-1, and it got me thinking about Versus coverage once again. I know that the NHL looks at as ratings poison, but it’s a real pleasure to watch games where the crowds treat an NHL game like American fans treat an NFL game. As we learned from the Outdoor Game on New Year’s Day, atmosphere plays a huge role in the buzz a televised sporting event takes, so would it hurt to throw the occasional Ottawa-Toronto blood feud our way? Yeah, I know that’s a pipe dream so I’ll propose a more reasonable idea: more Darryl Reaugh. That’s right, folks: it’s time Darryl. You’ve served the Stars well with your SAT words and silly banter, but the NHL needs a great broadcaster and Reaugh is a guy who can keep people watching. The one thing I can say about Reaugh is that he has a distinct voice: there is no NHL broadcaster that sounds like him. I knew the second I heard his voice that he was getting one of his rare national (well, if you consider Versus national) announcing gigs.


He keeps his analysis pretty simple, yet he’s clever when compared to John Madden and people of his "no shit" ilk. And besides, there aren’t many NHL announcers who make references to Napoleon Bonaparte.

So I think we’ve found the ideal replacement for John Davidson beside Doc Emmerick: and he’s announcing Stars games. And don’t worry, quality play-by-play guy Ralph Strangis. You’ll need a replacement, and hey, look, I’m looking for a job as we speak! Talk about a seamless repla…hey? Where are you going…?