I know the NHL trade deadline isn't up til Tuesday afternoon, but I have a feeling that this year's "frenzy" is going to be a letdown.

With Washed up Shaq, Pau Gasol and Jason Kidd dominating sports trading headlines in the last few weeks, it's hard to imagine the NHL topping the former No Balls Association this year. Still, NHL GMs could at least try to foolishly throw together panic deals for the sake of my entertainment.

Seriously, the best deal better not be the Cory Stillman to Ottawa trade. It already seems like Mats Sundin and Tomas Kaberle both did their parts in killing the fun for everyone. Now, who do we have...Mary Ann Hossa? Blargh.

Stars beat writer Mike Heika put Hossa to Stars as something of a dream scenario, but I cannot help but disagree. Yes, Hossa's a talented player and a noted two-way player.

But he's also exactly what the Stars don't need: a great regular season performer who fades during the playoffs. It's telling enough for me that the Ottawa Senators dealt him for Dany Heatley less than two years after the death of Daniel Snyder because they didn't think Hossa deserved elite player money.

When I think of Hossa I think of Jermaine O'Neal in the NBA: a good player you don't want to pay "franchise player" money. And that's exactly what the Dallas Stars would have to do to retain Hossa.

That Heika column made me feel a little better about my Olli Jokinen post, as he did list Olli as one of the possible guys on the trading block. I stand by my stance that, if the Stars could move enough salary to get Jokinen, he'd be an absolutely fantastic fit for this team.

Let's face it, the window is closing on the Stars. Their best players are either in their high 20s (Morrow, Ribeiro) or 30s (Good lord, I didn't know Marty Turco's almost 33 already!).

Yes, the Stars look good right now. But as I seem to remember, they looked pretty solid last year but got bumped in the first round. And remember when they got booted by the Colorado Avs that year they broke team records for wins? Yeah, they looked pretty good going into the playoffs then, too.

So, rather than being satisfied with a solid team, the Stars need to give themselves that extra push. The window is closing - Zubov and Turco aren't getting any younger. Jere and Mike are damn near dead. 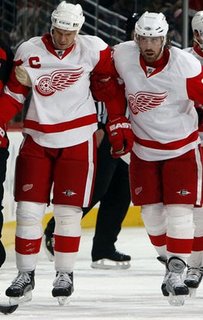 The Red Wings are reeling with injuries. The Ducks have bad karma with Niedermayer and Selanne's vacations. I admit that the Sharks have a weird Stanley Cup vibe to them (to me at least), but seem beatable still. And the Wild probably won't ever really go for the glory, since those Minnesota folks will keep buying tickets regardless.

So why not try to win the Cup this year? I know Tom Hicks doesn't care much about winning anymore, but why not one more run for old Mikey Mo? Another Cup would be a nice trophy to go along with his other, uh, trophy.

The Stars should absolutely make a move.

Also, I reached a milestone of sorts, as I think I might have made my first ever good prediction by saying that Evgeni Malkin was making a strong case for MVP consideration after he gave the LA Kings a beating. Now that he's leading the league in points, Malkin for MVP talk is gaining traction from, you know, people who aren't idiots.

Being that I make a lot of foolish predictions, this is a pretty special moment for me. Even if my point was as salient and unique as "children love candy." Feel free to shower me with Gatorade in the next week.

Consider yourselves part of irrelevant history.