Share All sharing options for: Ducks Gameday—Finally, a WCF rematch

I really don't know what to believe on the Sammy Pahlsson injury front; we've been told he's coming back any day for a month-and-a-half now. Still, a return is entirely possible this afternoon, and it would mark the first time this season that the entire A-Team would play a game together.

If so, the Ducks would be complete. And even though tonight represents the fourth and final game of the Red Wings season series, it has a strong feel of first rematch. For the first time this afternoon, Detroit will have a chance to avenge a close WCF loss to a complete Ducks roster—a team with all its wayward superstars finally reunited again. 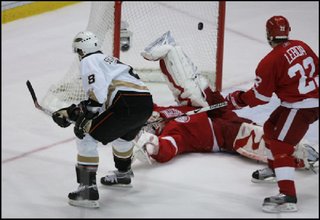 We all remember the last thing Teemu Selanne did in Joe Louis Arena, right?

All year, the Chief at A2Y has been maintaining, probably with more faith than I've shown, that the west will come down to the Wings and "the Fowl" this spring. For a while, that seemed a bit foolish to say, as the Ducks floundered aimlessly for stretches, but as the plan has come together, it's not so far-fetched as it once was. Certainly it's still a longshot—there are lots of teams in the west to be wary of—but if both teams play to their potential, it would be one hell of a series.

More to come on that later this spring, perhaps?

Prediction: Not only will this be a good measuring-stick game, it's also going to be a big statement game. The Red Wings have such a crazy lead in the west that there's not too much left to play for in the regular season, so revenge might be a powerful motivator. Still, the Ducks are rolling. Three Ducks in particular that have impressed the last couple of games: Selanne, Schneider, and Giguere. Anyways, Ducks win 4-2. Goals by the A-Team (why not? It's NBC.): Niedermayer, Pronger, Pahlsson, and Selanne.