Share All sharing options for: Ducks Gameday—Sleek gets long-winded

(Note: Rudy and guest contributor Steve Lepore have info on the Kings-Devils below--make sure to check those out!)

Well, another set of back-to-back games for the Ducks, despite still having played more games than anyone. And while the losing streak (0-4-1 since I skipped a GDP against Dallas) and pitiful offense continue (5 goals scored scored in the last 5 games, which is two less than Ovechkin has scored in his last 5), there is a bit of hope: perhaps the Ducks might find some offense in the goal-loving Eastern Conference. 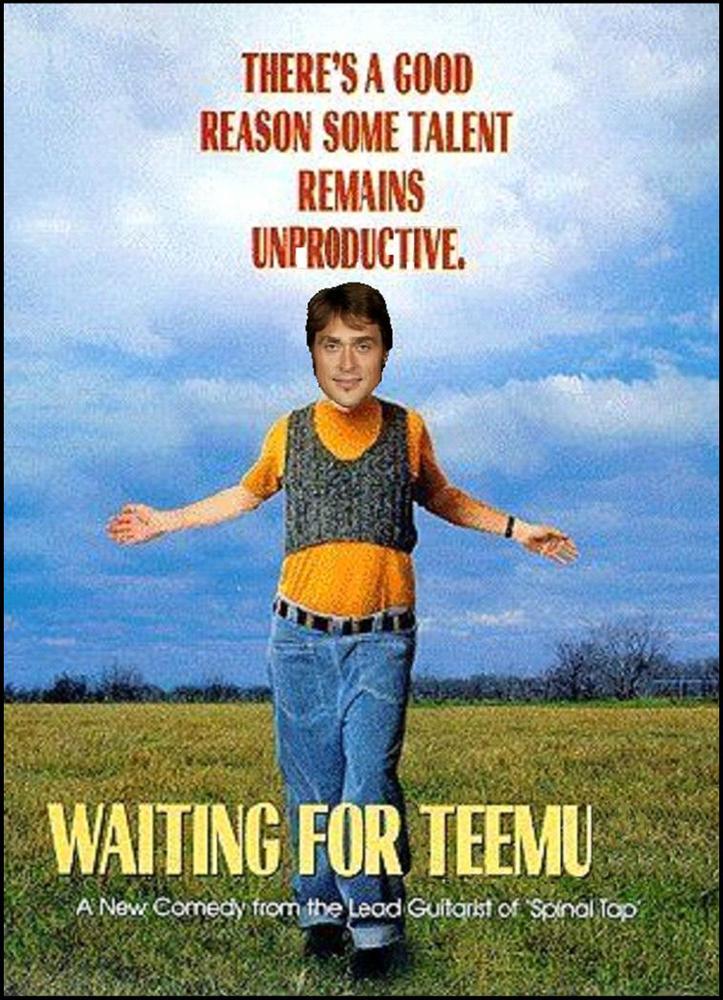 Teemu Selanne spent a bit of 3rd period time in the announcer's booth last night in St. Louis, and somehow managed to speak positively while his team scored absolutely nothing. He indicated he hoped to play sometime next week, but if I'm Carlyle, he's got to get into the lineup ASAP. Last year in 10 regular season games against eastern teams, Teemu scored 8 goals and 4 assists to lead the team (also point-a-game? Niedermayer and Pronger). Heck, even Sammy Pahlsson chipped in 4 goals during those games.

Still, the more the Ducks struggle in the offensive end (and I'm glaring straight at you, Getzlaf-Perry-Bertuzzi, who consistently tried to out-cute the Blues' defense last night), the more I start believing the need for Burke to start pursuing a mortgage-the-future deal at the trade deadline, not even to push this team over the top, but just to push their first-round exit to a semi-respectable six games. While I'll offer nothing but praise for guys like Mats Sundin or Marian Hossa, I tell you: if it costs the Ducks Bobby Ryan and the Oilers pick to get it done, I will be pissed off quite a bit. These two assets represent possibly the highest two draft picks in Anaheim's history, and to sell them for a few weeks of a pending UFA that we can't afford to re-sign, it's almost a sure-fire disaster (see: last year).

Maybe I need to clarify a bit: the Ducks have a lot of money tied up in very few players next year -- Niedermayer, Pronger, Giguere, Getzlaf, Schneider, Perry, and Bertuzzi will all be making a lot of coin. It's going to be paramount for this club to be competitive to get some cheap production, and while the Oil pick won't be ready to jump in right away (I'll assume), Bobby Ryan I think needs to be in next year's blueprint. Now some will tell you not to worry; Niedermayer's retirement is a sure thing next summer and will free up some spending money, but I refuse to believe it. I'm sorry, but here's a guy who contemplated retirement for six months and couldn't pull the trigger; what about that indecision suggests that he'll retire on his contract at the drop of the hat in July?

So I'm really hoping that Burke keeps a level head -- the only way getting a Sundin or Hossa at the deadline makes sense is if the Ducks are already playing like a cup contender, not if they're struggling. And perhaps, the ship will right itself and this will be the case. But I get a bit worried; I trust that Burke is as pissed off as I am about the current results and in a fit of anger may pull a hasty save-face, big-headline, break-the-bank move. Trust me: I understand that selling the future is acceptable to win a cup now, but if a deal like that gets done, anything short of Stanley is a swift kick to the franchise's nuts.

In my ideal finish, the Ducks stand pat at the deadline, just like last year, though I won't mind if Burke plays like he's active and drives up deadline prices. And really, I won't mind terribly if the team starts playing lights-out and then decides to add a superstar to an already-working lineup. What will drive me up the wall, though, is if the team continues to struggle and a deal is made out of desperation (Save us, Sundin!); that has "failure" written all over it, and will sting for years to come.

Prediction: By my recollection, the Flyers last season gave the Ducks their third-most-painful loss of the year. First would be the 5-0 loss to Detroit in G3 of the WCF (especially bitter because I was in attendance). Second I think is the 4-3 loss to Columbus in January, where the Ducks led 3-0 with 10:02 left in regulation and failed to even get a standings point. And third, then, was the 7-4 loss to last-place Philly, where the Ducks outshot the Flyers 41-16 and didn't even record a 3rd period save. The Ducks have already exacted revenge for the first two results; time to make up for that third one. Ducks 4, Flyers 1. Goals by Bochenski, Bertuzzi, Marchant, and Parros (if Selanne plays, though, he scores 'em all).