Share All sharing options for: Ducks Gameday—Warning: Dangerous Karma Ahead

The scene is set February 1st, COL @ DET: Late in the 2nd period of a scoreless game, Milan Hejduk puts a puck past Dominik Hasek, but the goal is disallowed for goalie interference. Here's Bill at A2Y:

Scott Hannan was pushed. Brett Lebda did it. I saw it. Dominik Hasek dove. I didn’t see that but I can assume it. Hejduk’s goal should have counted, but it didn’t. And all of that made me smile last night, and still warms me this morning. Somewhere in Denver the 6 remaining Dive fans angrily switched back to the Oxygen Channel, convinced the world is against them.

And we laughed at them.

The Chief then proceeds to rip on some Avalanche complaints (good fun, that), including this prescient beauty:

"If the roles were reversed Detroit would have gotten the benefit or at least a review." ...Please. Really? How many times (even though the call’s not reviewable) has Holmstrom been shafted in similar circumstances this year?

Forward to February 10, ANA @ DET: Late in the 3rd period trailing by a goal, Nicklas Lidstrom rifles a puck past J.S. Giguere, but the goal is disallowed for a very questionable case of Holmstrom interference. Here's Matt at On the Wings:

I’m a firm believer in the idea that profanity should only be used sparingly and in times of extreme emotion. Otherwise it loses its shock value. I’ve been pissed off enough before to use language I would otherwise not use on this site, but I have so far refrained from doing so. Not this time, however.

I’m in frank agreement with the fans at Joe Louis Arena: Dan O’Halleran’s call on Nick Lidstrom’s goal was bullshit.

Now Matt is certainly not alone in his sentiment (he was just the most eloquent), and I don't intend to pick on any of these bloggers for any reactions (I quite agree with all of them); they've just put in the legwork to set up the karmic imbalance for this post.

It's true. The referees hosed the Red Wings on Sunday, just like they hosed the Avalanche the week before. And yes, it is a tragedy that in such a low-scoring league such bad calls can go unchallenged especially in crucial moments of a marquee game. But really, this is a story about what goes around, comes around. The Red Wings got a referee's favor at the expense of the Avs, but a week later got their comeuppance at the hand of the Ducks. And if there's any truth in the karmic cycle, the Ducks should have an important goal disallowed tonight in Denver. The circle would be complete and karmic balance would be restored, all in a neat little three-game package.

I guess fortunately for me, life's generally not that fair, or at least not that tidy. It's more likely that the Ducks get awarded a questionable goal tonight instead.

Speaking of unfair, how did I not hear about the NHL's new movie endeavor? I hear the film's a tragedy, but it's critically acclaimed and everything! 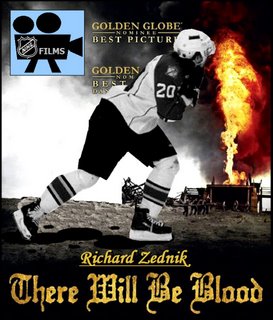 OK, I guess I'm the asshole.

Prediction: The Ducks are playing this game Weightlessly; Dig-Doug has gone home early with a shoulder strain, so I'd guess the Ducks play the same lineup as we saw in Detroit. I don't really mind Pahlsson centering Selanne; for sure it's two individuals playing with different mindsets, but Teemu's in a no-lose situation. If he scores, fantastic, and if he doesn't, it's just because he's one point behind Kariya for the franchise scoring lead and wants to set a record in front of the home fans. I've probably angered too many hockey gods in this post to predict a win, so Ducks 2, Avs 3. Goals by Kunitz, Pahlsson, and Selanne's goal gets arbitrarily disallowed.