Our good buddy, Steve Lepore from Kukla's Korner, is a Devils fan with a strong sense of sharing. In anticipation of tomorrow's matchup with Rudy's Kings, he's sent along a preview from the Satanic point-of-view. I've thrown in a cartoon because it's what I do, plus I had some free time between Anaheim goal celebrations (sigh). 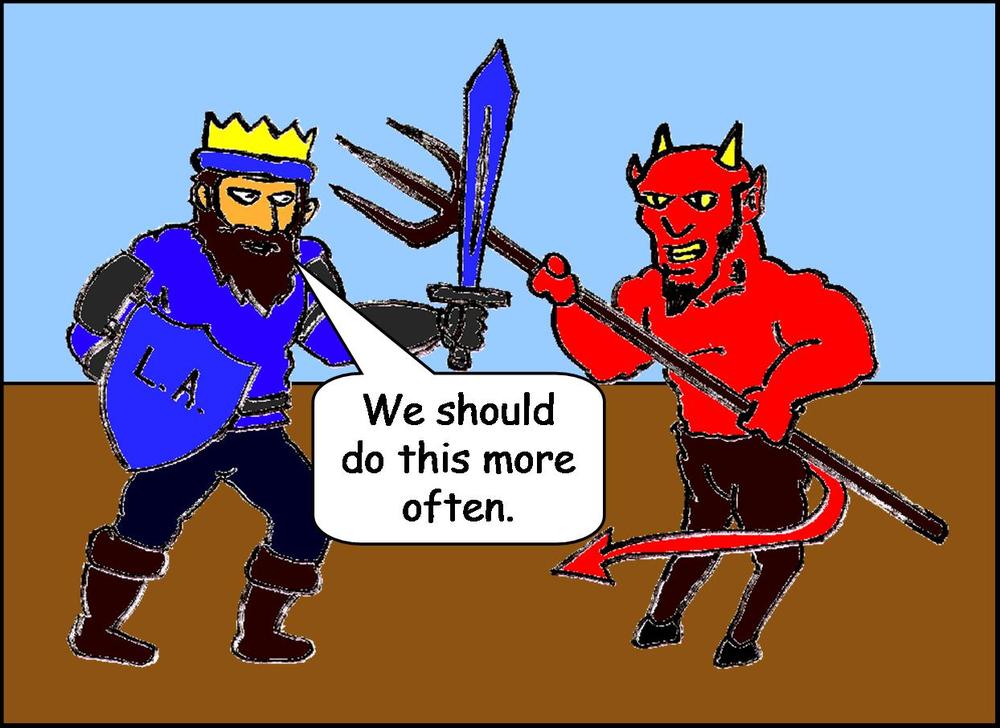 You know, it's not often a February game against the Kings is a must-win for an Eastern Conference team...or any game against the Kings for any team, for that matter. But the Devils, who have lost three straight at home, are coming off a loss to the Rangers tonight where it seemed they were the better club for most of the tilt, and probably need a victory over the 30th out of 30 Kings to keep this current stretch from going from bad to ridiculously bad.

The Devils are without star checker Jay Pandolfo, so the Devils may have trouble stopping the young Los Angeles attack. I will admit, I'm eager to see what Kopitar and Ko. can do against this someone patchwork New Jersey defense. Of course, Marty Brodeur is still there, and in case you Los Angelinos haven't seen him in a while...he's still kinda good. Marty loves to take on great offensive players he doesn't get to see often, so he'll be up for the challenge from Kopitar, Frolov, Brown, etc.

Offensively (Yes, the Devils have an offense), New Jersey is led by the awesome Zach Parise, with 19 goals. Patrik Elias floats in and out of consciousness (a la Jagr) with his 7 Year, $42 Million contract. Jamie Langenbrunner, Travis Zajac, Dainius Zubrus, Brian Gionta, and John Madden all chip in when they want to. The Devils are a maddening offensive team, but they seem to come up big on the scoreboard after getting beaten pretty bad. And believe me, any night you lose to the Rangers is getting beaten more than "pretty bad".

I'm looking forward to it. There's a shot tomorrow's game sells out, which every Western Conference fan will use as proof that even Devils fans want to see more teams from the west. Perhaps it could be that it's only the Devils 3rd Saturday home game of the season? For example:

So there. Anyway, should be fun. Enjoy!