This game is going to suck. We've lost Brad Stuart and it doesn't look like Rob Blake is going to be able to play until Saturday. Plus, Derek Armstrong and Jason Labarbera aren't making the trip with the team, meaning they're without those 2 for the next 4 games. Starting tonight? Dan Cloutier. (Was I like a Nazi or something in a past life? I bet Dan was.) Plus, it appears that the Kings front office has decided to keep most of our young guys in Manchester so they can get a taste of the playoffs (Purcell was sent down on Thursday), so we're going to be rocking the old guys line-up. Here's just a general idea of what the team will look like tonight:
Brown-Kopitar-Thornton
Frolov-O'Sullivan-Cammy
Calder-Handzus-Willsie
Ivanans-Ellis-Giuliano

Mmm, tanky. Basically, if you didn't read any of the above, the Kings are doomed. So, with that in mind, I thought I'd give them some alternate goals for tonight (since winning seems out of the question):
-Get Ivanans a fight
-Have Jack Johnson slash Dustin Penner in the face
-Let Brown completely decimate Ladislav Smid
-Put Horcoff out for the season... wait, scratch that
-Try to accidentally on purpose hit Brian Willsie with a slap shot when he skates in front of the net
-Let Edmonton win (do you want Anaheim winning the Stanley Cup and then drafting 1st overall?) 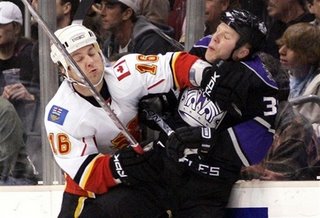 Get used to seeing this.

This is the start of a long, hard trek for Kings fans as we journey to the end of the season. To help, I'll be putting up a funny picture every post to help make us all feel better. To kick it off: 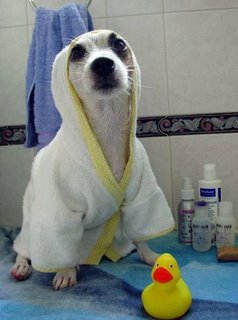 My roommate was telling me about Barry Melrose Rocks' most recent post while I was toweling off (...what?), and I blanched at the idea that Scott Parker looked tougher than Raitis Ivanans.* Then I saw the picture of Parker and almost pooed. That is the scariest man in the history of the NHL. My favorite part of that picture is that he has his own last name tattooed on his arm.