Kings Gameday: Is This Irony?

Share All sharing options for: Kings Gameday: Is This Irony?


Irony is a difficult thing to diagnose. I can never tell if it really is irony or if it's just coincidence. So, you'll have to tell me:

Rob Blake demands a trade at the trade deadline in 2001 and the fans hate him for it because they want him to stay.

Rob Blake wants to stay in LA instead of being traded at the trade deadline in 2008 and the fans hate him for it because they want him to leave.


Is this irony, or just kind of funny? I like to think that it was Bowlby that wanted to leave and Rob Blake who wants to stay.

If Blake is being honest (and I'm sure he does want to finish his career in LA), then our potential trade deadline haul just got a little less impressive. On the plus side, this could make Brad Stuart more desirable and I think fans of other teams will inevitably talk themselves into Stuart because he has the body of a prototypical defenseman. That'll last until the first time he passes the puck directly to the other team, and then they'll hate him. He's really the only piece we have left, besides maybe Derek Armstrong. I think there's a market out there for Armstrong, if a team wants a solid 4th line center who is a good locker room guy. I don't know, we have 12 days before everything shakes out, but I think Kings fans may have aimed a little too high and will inevitably be disappointed. 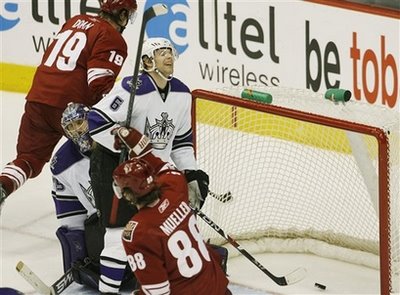 Goal by Mueller, assists by Doan and Stuart

And you know, I didn't hate Ladislav Nagy when he was signed to a one year, $3.75 million dollar contract; I didn't hate him when he failed to really win a spot on the line with Frolov; I didn't even hate him when he failed to outplay Jeff Giuliano and got himself benched. But now that he has some mysterious neck injury that will prevent the Kings from trading him at the deadline? I hate him.

Lauri Tukonen was called up at the expense of Brian Boyle yesterday. (What, Boyle only had 4 goals in 8 games? Send him down!) I imagine they're just giving Tukonen a shot at the show to see if he has a chance to win a job on our third or fourth line in the future. (They could be planning on trading him as well.) Boyle had been playing wing (not his natural position) with Frolov and Armstrong the last two games anyway so I imagine they'll just move Purcell up to his spot and let Tukonen play with Calder and Handzus. And still, Brian Willsie continues to wear an NHL uniform...