Share All sharing options for: Kings Gameday: Looking Back

Near the beginning of the year, the degenerates over at Pensblog asked me to write a season preview for them. Naturally I did, because I’m a fool and will work for free. The resulting post was probably my favorite of the year (which you can tell because everyone in the comments either hated it or ignored it), so I thought it’d be a good idea to take a look at that post and see where I went wrong with the Kings this season. (Remember, I thought the Kings would finish in 8th this season. I’m stupid.) Open up the other post and read it side-by-side for full effect. What's that? You're not going through all that just to read a stupid joke hockey blog? Quit being lazy, you bastard!

#1 Young Forwards. I was pretty spot-on with this one (although I wasn't exactly going out on a limb). I predicted that Brown and O’Sullivan would break out this season, but I also said Mike Cammalleri was a good sleeper pick because he would average a point-a-game. Whoops! I’ll give myself this one. 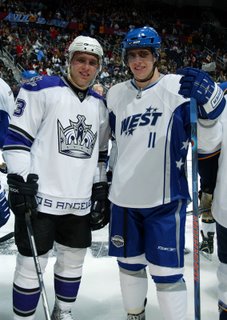 #2 Jack Johnson. I have to admit, I was completely wrong on Jack Johnson. I thought he’d run around hitting people and miss assignments, but surprisingly he’s been playing within himself. Sure, Bad Jack comes out every once in a while, but for the most part he's been very impressive. I was wrong on this one, but in a good way. 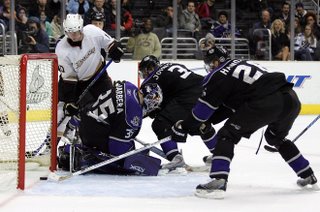 #3 New Additions. I’m not sure how to grade this one; I admitted that that Handzus was coming off an injury and curbed my prediction by saying, "If Handzus can come back from a knee injury…" but I expected him to be a little better than this. I think the free agent I’m personally disappointed in has been Tom Preissing. I just didn’t think he’d be our 5th defenseman this season. Maybe his worth shows up a little better when he’s on a winning team. The biggest fuck up I committed was not even mentioning that we signed Kyle Calder. I was wrong on this one. 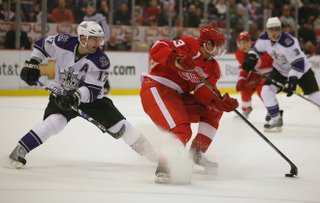 He is still 4th on the team in scoring...

#4 Lubo. Whoops. I still don’t quite know what to think of Lubo’s season. He definitely hasn’t been the Lubo of old, but there are still little flashes of brilliance that make me think he’s just having a bad year. The Kings’ biggest priority in the off-season should be getting a solid defensive defenseman to pair with Lubo. And for God’s sake, let him shoot on the power play! I was wrong on Lubo… this season.

#5 Goaltending. This is another one where I was wrong in a good way. Cloutier got hurt early so we haven’t yet been subjected to him, while Labarbera has been good enough for the Kings this season. I was wrong on this one, although to be fair it was more just a joke one more than anything.

So overall I was wrong on Lubo, Cammalleri, and the impact of Handzus. I also didn't mention it, but Blake played much worse than I thought he would coming off the hip injury at the beginning of the season. Does that translate to 7 spots in the standings? No, but then again, I obviously had emotional interest in having the Kings make the playoffs. I don't know, though, I don't think I was off by that much. (I was probably off by the Roethlisberger thing more than anything else.) I think the Kings' recent play is much more indicative of their abilities than their play in December. Oh well, we’ve been playing well lately and I expect Labarbera will play this game too, setting Cloutier up to play against .

It'll be interesting to see how Crawford does the lines today. Brown's back, so one would assume he'd line up in his eternal spot alongside Kopitar, but Frolov had 5 points in the 2 games Brown missed in that very spot. I'd be interested to see what Brown could do lined up with Boyle and Cammalleri; last year he played great when Kopitar was out because he had the opportunity to carry the puck up the ice. Of course, I wouldn't mind seeing Frolov reunited with Cammy, so either way... 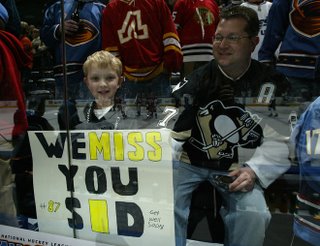 You should have made the "Y" and "U" yellow too, dipshit.

This is the first time the Kings are playing the Penguins this season, but I’m already really fucking sick of them. Jesus, how many times have they been on Versus this season? Why bother showing the vastly superior Western Conference when you can show a bunch of jackasses in yellow jerseys skate through living traffic cones for 60 minutes? Hopefully the Kings can get some exposure as they kick their -less asses in the teeth. ("Asses in the teeth?" "I don’t know, this guy should be fired.") Oh, and just because I am a petty, petty man:

Prediction: Kings win, 5-3. Goals by Brown (x2), Frolov, Preissing, and Johnson. The highlight on ESPN will consist of a brief showing of Malkin’s goal and then they’ll spend 45 minutes talking about Roger Clemens.