Happy Election Day! I hope all of you go out and participate in the democratic process. I voted for Lubo because of his "Pro-Cookie" policy. Despite it being one of my favorite days, I'm still a little bummed because the Kings dicked me over. The problem with the current newspaper situation in Los Angeles is that no beat reporter travels with the team, so when something happens we don’t find out about it until right before the game. Hence, the gameday post I wrote for the game against New Jersey was outdated before the puck was dropped. (Now I know how newspaper reporters feel.) What I missed: 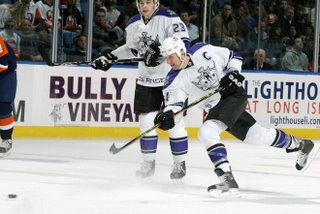 Do you need a healthy ankle to shoot 10 feet wide?

Rob Blake is out for two weeks with a broken ankle. I’m not really quite sure what to think of this. Is he sitting out so he’s rested when he gets traded to a contending team, or is he sitting because he's not going to be traded and they want him rested when they trade everyone else? The mind reels, my friends. (Also, how does Blake miss 2 weeks with a broken ankle, yet Sidney Crosby is out 6 with an ankle sprain? This once again proves my theory: Sidney Crosby is a pussy.)


Scott Thornton is out with a mysterious "sore neck." I think Todd Bertuzzi has struck again! 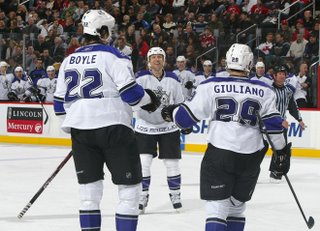 I'never thought I'd see those 3 celebrating a goal.

Brian Boyle and Peter Harrold were both called up. Boyle played well, tallying a goal and an assist. Man, is he a big mother fucker. I’ve always heard that he skates like shit, but I didn’t really think so. He has a long stride, but that doesn’t mean he’s slow. I’m pretty sure his playing means that Hugh Jessiman is the only 1st rounder from the 2003 NHL Draft that has not played in the NHL. Way to go, jackass. Harrold was okay; he played the fewest minutes of any Kings defenseman. I think they were just trying to get his feet wet, so hopefully now they’ll give him a shot on the power play.

So yeah, I don’t know what’s going on. This is a crazy team. (Also, they still haven’t called up Purcell to take Willsie’s spot. You have 3 days, Mr. Lombardi.) The Rangers have been playing well lately, winning 6 of their last 10 games. The New York media is attributing this recent success to the return of Sean Avery. Sigh… let me tell you how this is going to go. You’ll think he’s a little bit of a spark plug and sign him to a reasonable longer-term deal in the off-season. Then he’ll start doing stupid shit and maybe get into a fight with Marek Malik or call Georges Laraque a monkey again. You’ll start losing a little and then suddenly he won’t be that fun anymore. Eventually you’ll get tired of him and ship him off to some other team, where the cycle will repeat again. Good luck with that.


Prediction: I desperately want Dustin Brown to paste Sean Avery. That’s not really a prediction, I guess so here’s one: I will be very happy if Dustin Brown pastes Sean Avery.

Edit: Son of a bitch, I wrote this entire thing and then saw on Inside the Kings that Brown is taking a leave to be with his pregnant wife. Lord knows why he'd want to be there, it's disgusting. Has he seen Children of Men? Anyway, they'll probably call up Purcell now. Hopefully. For the love of God.

Edit #2: You have got to be kidding me. Cammy is coming back. Good lord am I bad at this.