Kings Gameday: WE GOT MATT ELLIS!!!!!

Share All sharing options for: Kings Gameday: WE GOT MATT ELLIS!!!!!


The Kings claimed center Matt Ellis, 26, from the Detroit Red Wings on Thursday. Ellis has played in the AHL for the past 4 years, averaging around 50 points in the past 2. More importantly, Ellis was the captain of Detroit's AHL team for those 2 seasons. (Also, he looks like Nelson Emerson.) He played 35 games in Detroit this season, tallying 6 points. Detroit wanted to send him down to the AHL to help with their playoff push, but the Kings swiped him first. Some people are baffled by the move, wondering why Dean Lombardi bothered picking up a guy who has no real business playing in the NHL when the Kings already lead the league in guys that fill that description. I think Dean made this move for 2 reasons: 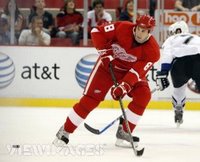 It looks like the puck is going 10 feet behind him...

1) Fill the roster. Last year when the Kings traded away Sean Avery, they took Jason Ward back. This was done to prevent the Kings from having to call up a younger guy who might not be ready to play in the NHL. As a result, the Kings were forced to accept slightly less from New York. Maybe they could have gotten a 4th round pick if they had not needed Jason Ward. With Ellis on the roster, the Kings won't have this problem.

2) AHL Leadership. The Kings probably can't send Ellis down to the AHL this season; most likely, Detroit will snap him up and then send him down to Grand Rapids. However, they can keep Ellis up on the roster, give him a few games here and there, and then send him down for next season. The roster in Manchester is incredibly young and will only get younger next season. The Kings can now provide them will a moderately skilled leader that will help them get ready for the NHL. This is what teams in last place should be doing: using their roster to set up their franchise in the future. It's not tanking, it's... "looking beyond this season." Okay, it's still kind of tanking, but I like the spin I put on it. 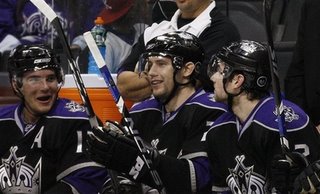 They're not letting O'Sullivan in on the joke.


Marc Crawford said yesterday that the Cammy-O'Sullivan-Frolov line will be staying together for today's game. I think it was a good move by Crawford to put those 3 together, but does he have to immediately give me a hernia by putting Scott Thornton and then Brian Willsie with Brown and Kopitar? Just give Ted Purcell one shot, please. I swear it'll work.

And benching Kyle Calder? What the hell? He hasn't played great offensively this season, but without him we have no one else to stand in front of the net for Frolov's power play unit. He does a good job fore-checking, allowing Handzus to stay with the more explosive forwards on the opposing team. Benching Kyle Calder while Jeff Giuliano, Scott Thornton, and Brian Willsie play is like.... it's like treating testicular cancer by cutting off your foot. Sometimes, I just don't know. You know what, I bet Calder plays with Kopitar now. That'd be just great.

Prediction: Commit to the Indian, my ass. Kings win, 8-3. Not quite as good as the last time they played, but pretty close. Goals by Brown (x2), Cammalleri (x2), Kopitar (x2), Stuart, and Matt Ellis.