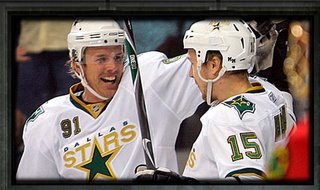 Feel free to take a second to wince at that headline.

OK, so Brad Richards got off to a pretty good start. And by pretty good I mean being the first Dallas Star to record 5 assists in a single game, which happens to be his career best for helpers. Yeah, not too shabby.

Sure, it was against Patrick La-lame, but still. Check out some of the ESPN highlights and a half second of Dallas Ice Girl (not cocaine) hotness.

Since I work an absurd 1-10 pm shift on Thursdays, I missed the game but I know from the highlights that the Stars decided to line up Richards with Antii Miettinen and Niklas Hagman, who had his first career hat trick in this game.

If they keep this line together, what kind of awful pun based nickname should they have? Perhaps the Rich Hags line (or if you feel the need to include every player's name I guess they could be the Antii Rich Hags??) or the BAN line? Meh. There's time for that. I guess the first name initials gimmick would be better if we switched Hagman with Modano (cue that annoying Emeril BAM).


Richards added that he "felt like a little kid again"


The sound you just heard was the muffled groan of the 5 remaining Tampa Bay Lightning fans.