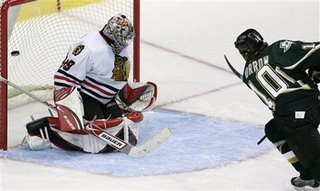 I managed to hop in my car at the perfect time twice today, catching some very entertaining interviews with Brendan Morrow then Mike Modano on Dallas's irreverent sports radio station The Ticket.

The best interview goes to the Stars' (relatively) new captain, who discussed among other things marrying a teammate's sister (note: not in a seedy, Martin Brodeur kind of way) and the ancient art of face-washing.* I can't quote his statements precisely, but he said that the key was having gloves that are six (though it sounded like he said sixty) years old so they "smell nasty, like old nachos."

Morrow went on to mention that although Steve Ott probably should be the franchise's elite facewasher, "he's small so he probably doesn't sweat a lot." Apparently, according to Morrow, Jeff Halpern has the nastiest gloves, yet sadly he doesn't use them in a face-washing capacity. (Perhaps Ott and Halpern should trade mitts?)

Judging from that brief but hilarious interview, Morrow could have a future on NHL TV.

Naturally, though, I'm sure an NBC studio show would love to have the Ticket's other guest Mike Modano before just about any other hockey player. Modano was pretty entertaining in his own right, as the Ticket guys did what any knowledgeable Stars journalists must do and mocked Brett Hull's former title of Ambassador of Fun ("Ambassador of Nothing," Modano joked).

Modano ribbed Hull pretty mercilessly, saying he "thinks he's not from Canada" because he got "cut" from the national team. He went on to accuse Hull of skirting co-GM responsibilities to see Led Zeppelin in London and take a two-week trip to Hawaii.

The interview finished with some Willa Ford-related hilarity. When asked what Modano would do if Ford demanded a baby, he replied: "I'd tell her to get ready."

When pushed for more details he said, "I'd guess I'd have her assume the position."

The Stars might have ruffled a few feathers when they gave Modano's C to Morrow, but let it be known that both captains can rock a microphone. Since Modano was adamant about not playing the role of a coach or any all-day hockey job in the future, may he be a natural studio host?

C'mon. You know that would be awesome.

* - They most likely asked him this question because of a recent New York Times article, which Eric McErlain mentioned at FanHouse.