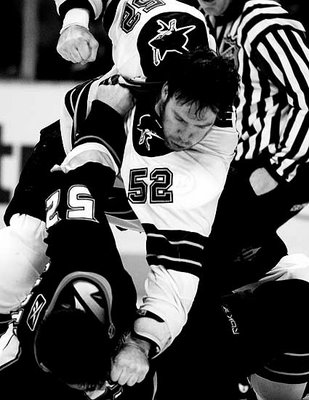 PJ invades my post with a dubious picture. Can't trust those Sharks fans one bit.

The Sharks come into this one on a 14-game point streak (13-0-1), in which they've picked up one less point than the Ducks earned on their "record"-tying 16-game point streak (12-0-4) to start last season. I took a glance over the stats, and here's two stunning tidbits about the Sharks' streak:

(1) They have been outshooting their opponents like crazy, by a total margin of 457 - 330. In half the games they outshot their opponent by 10 shots or more.

(2) They are winning despite their special teams, not because of them. Over the streak, the Sharks have 10 power play goals for and 10 power play goals against (PP 17.5%, PK 80.4%). For comparison, when the Ducks went on their binge last year, they utilized a 20.9% PP and an 89.1% PK, and produced half a power-play goal more per game than their opponents.

San Jose is earning wins 5-on-5, by the looks of things, and that should be a sign for Sharks optimism; special teams should naturally improve, I think. That couldn't be said too much during Anaheim's streak.

I can't knock Anaheim's chances tonight, though. The Ducks have managed 15 wins in their last 19 games, four wins coming without the services of Chris Pronger. It's not all roses, certainly, but Giguere is playing Vezina-caliber hockey, and the two Niedermayers have really been playing phenomenally. One thing to watch for tonight will be Sammy Pahlsson and Joe Thornton. Jumbo Joe has but 1 goal and a -2 in five games against Pahlsson; Thornton's only multi-point effort against the Ducks this season came the one time Sammy was out of the lineup.

So what it boils down to is this: A Battle of California for the ages. Two teams that have been virtually neck-and-neck since the lockout, both now stockpiling wins at an alarming rate. They're about to collide for the first time in more than two months, and I can't wait.

It's deserving of its own version of "State Rape", don't you think? 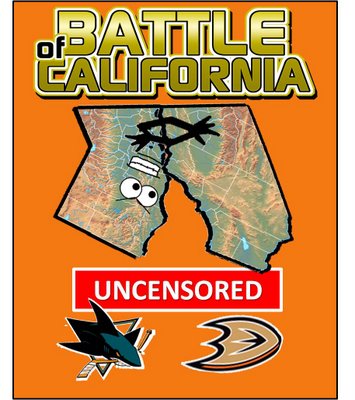 My cousin snapped his neck trying to do this.

For anyone who's confused how we got to this level of geographic disdain: Minnesota (the debut), the Buffaslug, Minny's Revenge (guest artist PJ), New York's Big Apple, and recently the Battle of Ontario.