I had a lot of fun Wednesday at the Kings game with Rudy, so much so that I've decided to go back to the Honda Center tonight for some more BoC fun, this time at the expense of the San Jose Sharks. I won't be in the same seats, but will be sporting the green shirt in 224 row R, thanks to a Red Wing buddy of mine who I suppose is advance-scouting the western competition. Stop by and say hi, if you dare.

It's a little bit lame that the Sharks have kept so far ahead in the Pacific race to end this season (the Ducks last year made it sporting and didn't clinch the Pacific until the final day last year), but I guess it works out for me and my alcohol-tempered stress levels. If the teams were neck-and-neck, I'd probably worry too much about the outcome, but as it stands, I don't think any game development will bother me particularly tonight. J.S. Giguere claims he's ready to play (somebody's feeling the Hiller pressure), but we'll see what Carlyle does. Part of me still wants to see a game out of J.S. Aubin.

Anyway, as part of our Kings-Ducks ultimate blogger experience, Rudy and I contributed (and I'm using that term in its loosest sense) to Finny & Connie's "I'm Not a Puck Bunny" podcast, speaking into some mystifying modern technology wired into an upside-down phone. Finny gave me the code to paste for the audio below—give it a listen (fair warning: if you're listening strictly for Earl and Rudy, we don't show up until the late 36-minute mark). She was also very apologetic that my closing "Heil Hiller" comment disappeared somewhere in the transfer process, but that's probably for the best. I've taken enough European heat (rightly so) for my Hiller/Hitler jokes in the past.

See if you can find the spot where I say "Oh, if it goes to a shootout, I guarantee the Kings win."

ON ANOTHER NOTE: Not often do readers comment on old posts, and I'm not normally one to direct attention when it happens, but the following was left on a nearly-year-old Brad May-bashing post last night, and it's too juicy not to share:

"I'm a lawyer in Phoenix trying to collect a judgment my client obtained against the 'gutless puke of a thug' Brad May when May, drunk, punched my client, a uniformed sheriff's deputy, at a Scottsdale, Arizona nightclub, in 2002.

May is dodging the judgment (only about $30,000), and claims to be a resident of Canada. Does anybody know if he actually lives in Anaheim? Does he still do his golf tournament in Phoenix? Any information on May's "residency" would be most appreciated.

Wow. I don't really know anything about players' living or golfing habits, but I figure somebody might be able to help this guy out with some info, if you think it's a legit request. I will say it certainly sounds like a plausible story, but I've softened a lot on "Mayday" since that angry post, simply because he is one of the best Ducks in front of a microphone, as I shockingly learned on the championship DVD. I'm a sucker for player personality, and May's got it in spades. Still, Canadian residency is a lame excuse for punching then stiffing a cop (though I must say, I didn't know you could make $30k just by being punched). 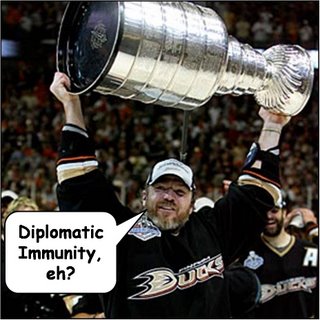 So readers, what's your verdict? Guilty, or is it too suspect that evidence is being gathered in the comments of an 11-month-old BoC post? And if he is guilty, based on what little we know, what's a fair punishment?

Let's get this case settled BoC-style (lots of rhetoric and little substance).

Prediction: The last four Duck games have ended in 2-1 final scores, but I won't be swayed. Ducks 4, Sharks 2. (Insert goalie name here) has a stellar game; goals by Selanne, Bergeron, Pahlsson, and Mayday. Sleek manages to go a whole game without being interviewed or suckerpunched.