Share All sharing options for: Ducks Gameday—Back so soon? 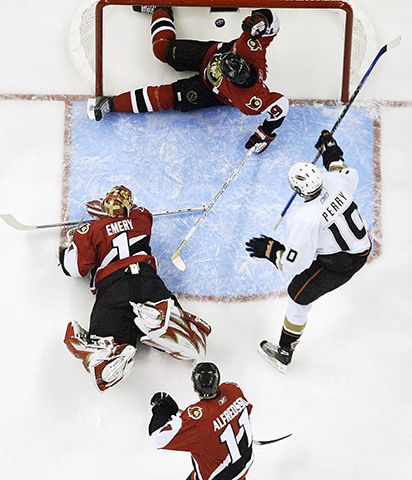 And while both these teams have near-identical records coming into this game, there's certainly been an odd pattern in getting there. The Ducks were a .500 team before Scott Niedermayer returned to the lineup (15-15-4), but they have amassed a 22-8-3 record ever since. The Senators, meanwhile, screamed out of the gate. They were 21-7-3 before Scott returned to the league, but have been reduced to a .500 club ever since (16-16-3). I'm not sure why the Sens have so much trouble winning in a league with two Niedermayers, but there you have it.

I spent some time today watching a few games from that SCF series; wow that was a crazy series. I mean, with Minnesota, Vancouver, and Detroit at least we had some idea of how the teams matched up, but Ottawa was a very unfamiliar foe (for nostalgia's sake, here's 10 questions about the Senators and 9 questions about the Ducks from before the finals). In the west, Pahlsson had been shutting down scoring lines all playoffs, but on the other hand the Spezza line was ripping through checking lines in the east with ease. It seemed whoever won that matchup was likely to take the series, and fortunately for me, Sammy dominated, and it wasn't really close. For Sens fans who haven't followed the Ducks since last June, the checking line is still intact; McDonald and Penner have departed, but have been replaced by Bertuzzi, Weight, Schneider, and Bergeron. It's scary, but this year's Ducks team may turn out to be better than last year's version; since Selanne's return Anaheim is 10-1, an eleven-game record that they were only able to accomplish once last year.

I can tell you that I'm pumped for tonight's game, because I'll be in a familiar spot: sporting the lucky green shirt and sitting in the Row B seats (the same ones I had for SCF G2: Sammy 1, Sens 0). I imagine I'll be playing the part of the loud-mouthed gloater, especially once I get some liquor in me. Feel free to stop by and say hi, or catch me in the intermissions hanging with the smokers.

Prediction: The really sweet thing is, it doesn't even matter what happens tonight. If the Ducks beat the Sens tonight, then Ottawa fans will be depressed—they aren't any closer than they were last spring. If the Sens beat the Ducks tonight, then Ottawa is depressed for another reason—where was that effort last June when they really needed it? Well, I'll take Option A: Ducks 4, Senators 2. Anahiem goals by Selanne, Coach Pronger, Pahlsson, and G5 hero Chris Phillips. A frustrated Daniel Alfredsson maliciously shoots a puck at the cup banner.