Share All sharing options for: Ducks Gameday—Like taking candy from a Blackhawk

The table below shows all of Anaheim's 14 western conference opponents (plus a 15th group, the eastern conference), and the Ducks' regular season record against each opponent since the NHL lockout. Essentially, this list represents which teams the Ducks have most easily taken points against, and you can see that Chicago sits way way atop this list. 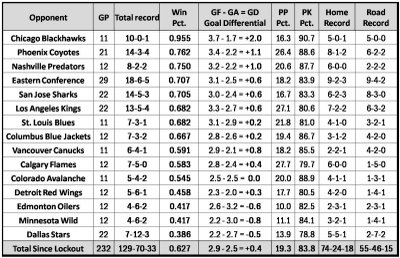 The Blackhawks, as I've heard time and time again, are a young improving team, so I guess someday soon I'm going to miss this era where the Ducks show up and automatically collect two points. Not too soon, I hope. Chicago has been Anaheim's best boost for offense, defense, and penalty killing.

Some other comments about this opponent table:

There's about another week of "loose end" opponents before the Ducks break into full Pacific mode, and frankly, I can't wait. The storylines have been brewing since Christmas. The Ducks are supercharged with Niedermayer and Selanne, and the Sharks are hitting stride with Campbell and re-emerging forces in Cheechoo and Marleau. The Stars got past both those teams without Zubov or Boucher, and now they've added millionaire Brad Richards to a formidable roster. The Coyotes are howling for that eighth seed and some '06-style Bryzgalov postseason magic, and the Kings are flat-out determined to fuck up somebody's seed. A Pacific Division Finale seems an awesome way to end this year—selfishly, from a BoC perspective, who says the schedule needs fixing?

Prediction: My commuting life sucks this week, and I probably won't get to watch tonight's or tomorrow's game until probably Friday. Don't worry about spoiling anything; I'll be informed enough to know the score. If anyone wants to let me know their game impressions, though, I'd be glad to read 'em. Oh as for the game prediction, let's call it a tight one. After all, Chicago is a young improving team. Ducks 4, Hawks 3. Goals by Beauchemin*, Getzlaf, Pahlsson, and May. As a bonus, Bryan Murray gets ejected from the game for trethpathing.

* My latest craze is to yell, "Take THAT, Bergeron!" any time a Duck blueliner scores a goal. Or even if there's a good shot on net. It turns out I'm yelling that phrase quite a bit, actually—I've also incorporated it into my video game lingo and used it while driving in SoCal traffic.