Ducks Gameday—Playing without any CPs

Share All sharing options for: Ducks Gameday—Playing without any CPs 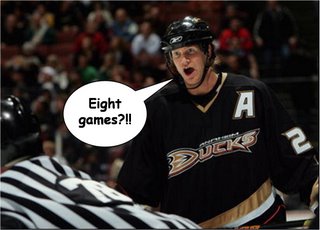 Damn, I had to change the text from his last two suspensions.

So the verdict is in: 8 games for Stompy. As such, the Ducks will be playing the next eight without either of its CPs: Corey Perry, a victim of Jose Theodore’s skateblade, and Chris Pronger, a victim of his own. I guess this can be the reaction post: Was it enough? Too much? Dead on?

Schedule-wise, that will mean Stompy will be eligible to return on April 6, the last game of the Ducks’ season. Three full weeks for Pronger to repent his sins, heal his jaw, and focus his anger for the playoffs. I have to say, even had Pronger been able to play, I’m not sure catching the Sharks for the Pacific lead was feasible, not at the rate they’re winning, so I think (sadly for the haters) that this works out pretty well for the Ducks. Carlyle still has the sixsome of Niedermayer – Beauchemin - Schneider - O’Donnell – Huskins - Bergeron to rely on, which I think is more than fine.

Up front without Perry, it’s going to be up to guys like Getzlaf, Selanne, and Kunitz that will have to consistently produce points, and Weight and Bertuzzi must do their best to not suck. Bobby Ryan’s been shelved on the fourth line in favor of Marchant, but I think he’s gotta step up and get in the offensive mix. I can be patient so long as Marchant does his best Perry impersonation (3 straight games with the opening goal, all of typical nonsense Marchant variety), but I’m not sure how long this lucky streak can last. Maybe it can hold out until St. Patrick’s Day.

I totally forgot that the Ducks were playing today; I misread the schedule and thought they were playing tomorrow. It’s an easy mistake for a Ducks fan to make, as this will be the 2nd Saturday night regular-season game in Anaheim in the last two seasons—they hosted the Avs on a Saturday last season, too.

Side story: I asked my dad, who’s twice as Irish as I am, what his plans were for St. Patty’s Day, and his response cracked me up. "I’m not usually that social on St. Patrick’s Day, or on New Year’s Eve, for that matter. Too many amateurs."

Prediction: Ducks have won their last eight games at home, and their last four games without Pronger. I think when Pronger got suspended last playoffs, it helped the Ducks get an "us vs. the world" mentality that really helped them overcome; let’s hope they find that again. Ducks 5, Blues 3, in Anaheim’s last non-Pacific game of the season (can I mention again that I love the schedule this year?). Goals by Marchant (can he dare do it again?), Bergeron, Pahlsson, and Selanne x2.