Ducks Gameday—Refocusing on the playoffs

Share All sharing options for: Ducks Gameday—Refocusing on the playoffs

Well, like Rudy below, with last night's result against the Sharks, I'm not sure I'm overly concerned with Duck game outcomes from here on out; they don't all need to be wins. It certainly seems that upward mobility in the standings is out of the question, as is dropping out of the playoff picture completely; now it's just about getting enough points to not slide very far. I've always been less concerned with playoff seeding than I probably ought to be; the more crucial thing has always been playing well when the playoffs arrive. Let's put it this way: there's no comfortable seeds in the west. It's a deep conference, and any team is capable of a first-round win. Last year the Ducks won the cup as a 2nd seed, but they've had fantastic runs from the 6 and 7 spots.

So to me, the bigger question isn't: can the Ducks hold off Dallas & friends for the fourth seed and home ice? Rather, it is: can the Ducks start the playoffs with the best roster available?

Last night Giguere pulled up lame with back spasms before the game, and was a surprise non-starter, throwing rookie Jonas Hiller to the bloodthirsty Sharks. This is pretty significant as each of the last two playoff years, Giguere has similarly been a surprise no-show for the postseason opener. Fortunately, the Ducks had a crazy Russian in reserve both those years (one whom they'll be visiting tonight) that was capable of dominating a series. It will probably be Giguere's decision when he returns, but hopefully he can sense that there's not a terrible rush for regular season wins. What's really critical is that he is game-ready for the first game of the postseason, wherever it is.

This principle can somewhat apply to any of Anaheim's major players--Niedermayer, Pahlsson, Selanne, or Getzlaf--there's no need now to be overextending those players in a quest for a higher fourth seed. Pronger, I guess fortunately, is having his jaw rested through league enforcement. Now perhaps Giguere can keep him company a few games before they return saved up for the postseason.

Political aside: I'm never one for presidential politics. I'm cynical and lazy about the voting process, and don't much care for anyone who passes for a legitimate candidate. Still, I am willing to reconsider, if only they'd address my issues: 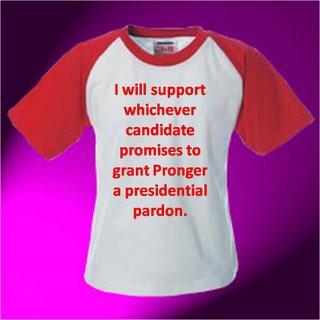 Prediction: Hiller was really encouraging with his surprise-start 41 saves last night; he was shaky in his first minute, but after that surrendered only a 5-on-3 goal in a game where'd you'd think "only one?". Should Giguere pull his usual G1 crap in a few weeks, I'm already feeling better about that potential Bryzgalovless scenario. As for offense, generating zero shots in the 3rd period looks worse on paper than it did on the ice, but I think that'll help spark the Ducks' forwards tonight. Ducks 4, Coyotes 2. Goals by Kunitz, Huskins, Pahlsson, and Bertuzzi.