Share All sharing options for: Ducks Gameday—Reviewing the goaltender giveaway 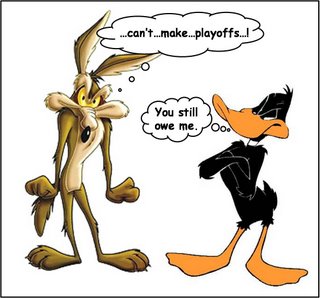 I made this table below to show how the Coyotes have improved since they picked up Ilya Bryzgalov on waivers, including beating both J.S. Giguere and Jonas Hiller in shootouts. Interesting, since he'd never won a shootout for the Ducks, but then again, the Ducks have one of the worst shootout lineups around.

Of course there's been more going on than just Bryzgalov since mid-November, but damn that's a mean improvement in goals-against. Also, somehow Breezy has managed to improve both the power play and the penalty kill by 6.4%. Crazy Russian.

You should definitely read Rudy's King-bracket breakdown below. My vote goes to Tomas Sandstrom, as his one-timer in NHL 94 is the reason I'm a hockey fan today. Speaking of brackets, thanks to my inability to turn down a bet BoC has been engaged in some sort of March Madness blog battle between The Play in California and Gossip on Sports (and maybe others). What this means is that we will go through the pretense of filling out a college basketball bracket, then once it's proved we're incompetent some other blog will be writing gloat posts here for a day. Anyway, if anyone wants to offer any good advice picks, leave 'em in the comments and we'll try to go down swinging.

Prediction: Bobby Ryan had a good re-debut on the 2nd line, which gives me some optimism about playing without Perry. Still, the 'Yotes have been playing the Ducks pretty tough all year. Ducks 3, Coyotes 1. Goals by Selanne, Pahlsson, and Kunitz.