The Kings are doing a March Madness-style tournament to figure out the biggest fan favorite in the history of the team. It's dumb but fun so I thought I'd get all Joe Lunardi on you and break down the brackets. (For some reason Roman Cechmanek isn't listed, but I assume that's an oversight.) First up: 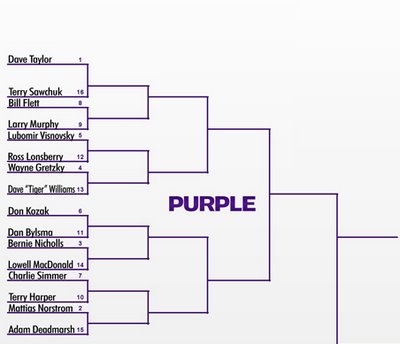 Toughest Match-Up: Mattias Norstrom vs. Adam Deadmarsh. Norstrom would appear to be the easy choice, but Deadmarsh has gained a cult-like following since he retired due to lack of standing ability. I think it'll be a tough fight but I expect the a small group of people voting many times will sway the vote in Deadmarsh's favor.

Ultimate Victor: In a bracket that includes Dave Taylor and Wayne Gretzky, I'm going to go with Adam Deadmarsh. If he can get by Norstrom, he'll build momentum heading into a bracket showdown with either the victor between Taylor and Gretzky. Gretzky has never been completely embraced by Kings fans and Taylor's stature was somewhat diminished by his tenure as GM (when he traded for Deadmarsh, I should add), so I think Deadmarsh can win those match-ups. What can I say, it doesn't make sense but people love the bastard. 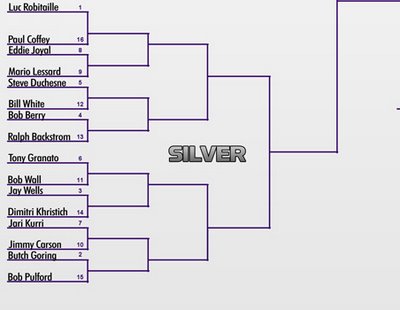 Easiest Win: Luc Robitaille over Paul Coffey. Luc is everything LA hockey should be and Coffey only played on the team for 2 seasons. By the way, why the fuck did we trade Coffey for Jimmy Carson and Gary Shuchuck??? What if we had him in the finals against Canadiens? This will keep me up tonight.

Toughest Match-Up: Eddie Joyal vs. Mario Lessard. I don't know who they are, so it'll be tough for me to pick one over the other. 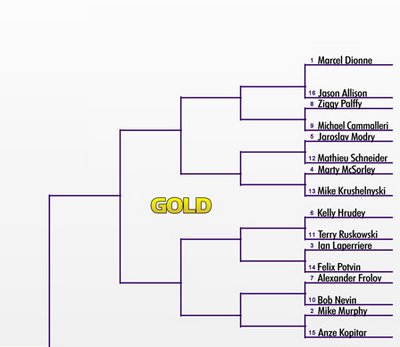 Easiest Win: Kelly Hrudey over Terry Ruskowski. It's obvious to me that Hrudey will swing in on a rope and defeat Terry Ruskowski in a sword fight before setting sail with the commodore's daughter. No, I do not have this all written down as a fan-fiction. Get off my computer! MOM!!!

Toughest Match-Up: Ziggy Palffy vs. Michael Cammalleri. Palffy should win easily but it's tough to tell if people will vote for players just because they're currently on the team. I think Palffy will win out, but I'm not quite sure.

Black Bracket (this seems racist, why make Anson Carter have his own- oh...) 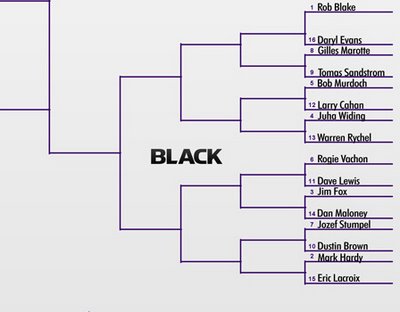 Toughest Match-Up: Gilles Marotte vs. Tomas Sandstrom. Not really, but I just wanted to give some love to Tomas Sandstrom. Don Cherry may hate him, but I sure love him. I mean, look at these moves:

Ultimate Victor: I think Blake will get taken out early and then Jimmy Fox will sneak in on name recognition. His acceptance speech? "Thanks a lot!- it'sanhonor."

So there's my in-depth analysis of the bracket so far. When it gets down the Final Four I'll probably review how I did, unless you guys think this sucks. Please don't.