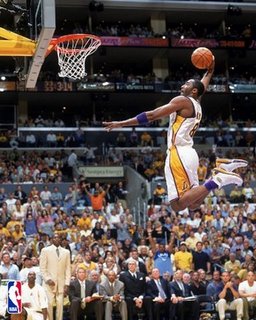 It also brought up another question. Is there an NHL player who is as unstoppable, but at times unappreciated like Kobe Bryant?

At 36, Jaromir Jagr cannot really physically dominate like he used to, but that's the first name I could come up with. Both stars are generally disliked, they both won championships early in their careers and they both demanded a trade that would separate them from their bigger-than-life running mates (for Kobe it was Shaq; for Jagr it was Lemieux even if the Jagr situation probably had more to do with his obese gambling debts).

I think the most shocking similarity is that Jagr and Bryant have exactly one regular season MVP trophy between the two of them (Jagr's sole Hart Trophy), even though they've easily been one of the top 3 scorers in their respective leagues for several years. That just shows you how trend-heavy trophy voting is. I, for one, would like the flavor of the month shit to stop. 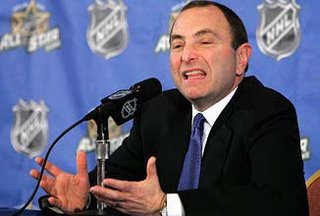 Making this man look good is not an easy task

That guilt stems from the notorious relocation of the Hartford Whalers to Raleigh. Here's a few comments that were featured in The Sports Guy's column:

This whole situation is eerily familiar to the Hartford Whalers fiasco of the 1990s. The team was sold to petulant, whining owner who, after systematically trading away almost every talent on the team, save a couple of players (Primeau), demands a new arena, then blasts the city and the governor for not being committed enough, moving the team to some small market and leaving a city scorned and a generation of young fans disillusioned.

As a kid in Hartford, I hated Peter Karmanos, that rat of an owner, with every inch of my body. When I saw the Hurricanes win the Stanley Cup, I was happy for Glen Wesley, the only Whaler left ... until I saw Karmanos hoist the Cup. To this day, the feeling of emptiness I had, sitting in the Hartford Civic Center after the last game, seeing the players throw all their equipment into the stands, is something I will never forget. I hope everyone will realize just how pathetic and truly evil the ownership of these two organizations were.

I was a Hartford Whalers season-ticket holder for 10 years before they were stolen from a small group of loyal fans and moved to that hockey hotbed, Raleigh, N.C., by Peter Karmanos. I've yet to watch a hockey game since they moved and feel for every Sonics fan out there. There were signs in the Civic Center that said, "Kuck Faramanos" but were taken down by management. A note to all Sonic fans: You'll really resent ownership if/when the team wins a championship in their new city. That's how I felt when the Carolina Hurricanes won the Stanley Cup.

I wish this forum were around when the Whale left town. Losing a team is like a death in the family.

At times it seems like the Simmons is losing his fastball, but this is one of his greatest moments as a sports writer. Considering his prominence on ESPN.com, this controversy might actually make Daniel Stern look worse than Gary Bettman. Now THAT is impressive.

This would be a unique opportunity for Rudy Kelly to get a chance to gloat about the Los Angeles Kings (although he might be smart to pick a different team since their goalies are horrid...who said video games aren't realistic?). Anyway, I'll spread the word once I get some high speed internet action (probably sometime soon after March 15, aka payday).


*I am completely unable to grow respectable facial hair, so when I say "I can already feel my playoff beard growing" what I really meant to say was "my beard lust is increasing by the second."