Share All sharing options for: Frolov for Lady Byng!

"To the player adjudged to have exhibited the best type of sportsmanship and gentlemanly conduct combined with a high standard of playing ability."

These simple words detail the requirements and the essence of the Lady Byng Trophy. Donated by Lady Byng (the original Puck Bunny) in 1925, the award long stood out as the pre-eminent prize in the world of hockey. Sadly, inexcusably, the award has fallen upon hard times as of late; instead of going to true heroes of the most honorable sport in the land, the award has instead gone to fearmongers and rabble rousers. It is not too late, however. We can return this illustrious award to its former glory. How? By awarding it to a man of great courage and conviction. A gentleman who has always played the game fairly and without malice. A man who is without question the greatest person who ever lived. A man named Alex Frolov. 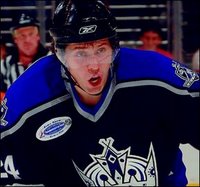 Who is the man standing in the way of Alex Frolov's trophy? Pavol Datsyuk. (Boo! Hiss!) Please people, try to remain civil. Datsyuk has won the award the past 2 years, defiling this most honorable of awards with his foul stench. Oh yes, he seems decent enough, but look under the surface and you'll see he is the most unsportsmanlike of fellows.

They say Datsyuk is a gentleman, but do fellow NHLers and their fans like playing against them? How often have you heard someone say, "Man, I love playing the Detroit Red Wings!" Not very often, I'd bet. On the other hand, I hear people express how much they love playing the Kings all the time. I even heard one Montreal fan exclaim, "I wish we could play the Kings 82 times a season!" I assume this is because of their sportsmanship, led by the one and only Alex Frolov.

They say Datsyuk is a gentleman, but who leads the league in takeaways? That's right, Pavol Datsyuk. How gentlemanly is that? A true gentleman is someone like Alex Frolov, a man whose team always gives the other side a chance to score. That is how a true gentleman plays the game.

They say Datsyuk is a gentleman, but who is a known Russian? That's right, Datsyuk. "But wait," you might say, "isn't Frolov Russian as well?" Yes, but he's the good kind of Russian. You see, there are 2 kinds of Russians in this world:

1) The good kind of Russian, like Nikolai Gogol or Yakov Smirnov or the cooky scientist from The Saint

2) The bad kind of Russian, like Stalin or Ivan Drago or the evil military guy from The Saint

Do you people see the potential danger here? One minute, we're giving awards like the Lady Byng to people like Pavol Datsyuk; the next, we're eating Borscht and saluting our new Soviet overlords. Think it can't happen? That's what they always say right before it does.

They say Datsyuk is a gentleman, but his head is shaped like candy corn:

Compare that to Alex Frolov:

-Averaging a point a game

-Never has a bad word to say about anyone (or anything)


NHL Writer's Association, you have a choice: you can stick with the status quo and yet again select Pavol Datsyuk, despite his obvious flaws and his oddly-shaped head. Or, you can do something unprecedented in the history of the NHL and give it to the person who best embodies the award like no other. Vote for liberty. Vote for hope. Vote for Alexander Frolov.


(But seriously, why the fuck not? He's more deserving than some cockfuck like Brad Richards.)