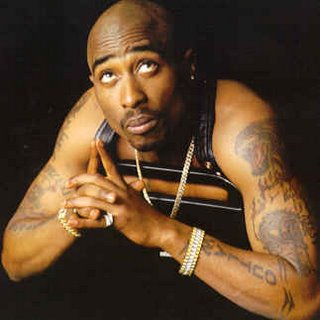 Unless you suffered from a 24-hour coma, you've probably heard the news that Brett Favre retired from the game of football.

The first thing I did after I learned the news from Satan Skip Bayless and the WWL crew was send my buddy a text message that compared Favre to Tupac (faking his [football] death, not having a blood feud with an obese East Coast rival).

Not soon after, my thoughts turned to the great hockey un-retirements...which made me realize just how much more I have to learn about hockey history.*

In fact, I'd like to make an open challenge to NHL history guru Joe Pelletier to educate us young 'uns about the sure-to-be myriad hockey returns I don't know about. But for the sake of brevity, let me run briefly through the ones that come to mind and give each one a snarky rating at the end.

The near-simultaneous Teemu and Niedermayer de-tirements

Obviously since these "returns" happened just this year, we won't know where each reemergence ranks in hockey history until the playoffs take place. But I think I speak for non-Ducks fans everywhere when I call these returns "glorified vacations." Or, lame.

Rating: Somewhere between the trade-enforced return of Keith Van Horn and whenever oblivious 80's teen movie parents return from their vacation early to stumble upon their children's massive keg party.

There's a lot to like about Koivu, but most of all you really have to marvel at the guy's resiliency. If it weren't for the fact that Mario Lemieux won a friggin' Hart Trophy while recovering from chemo therapy, I think Koivu would get more credit for his stunning recovery. I also recall a player coming back from cancer in the late '90s, but his name escapes me. I'm definitely going to kick myself for forgetting his name.
Rating: A partial Lance Armstrong.

Has there been a more special return, considering their run to the Eastern Conference Finals and the fact that both Jagr and Lemieux were in the top-3 in Hart Trophy voting that year? Of all the experiences in my life, I think that playoff/regular season run might be the moment I will never be able to judge objectively.

Rating: Jordan returning from baseball...and the world deleting any memory of his time wearing a Wizards jersey. 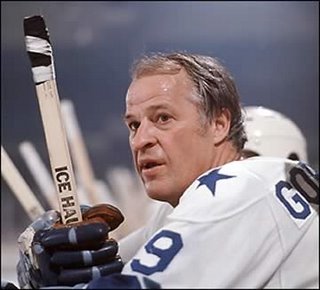 The Gordie Howe hat trick might be one of Howe's lasting legacies, but the guy had more hockey lives than a cat. Any time you see some boxer keep coming back or witness some legend foolishly trying to rekindle the magic of the past, just point to Howe.

He played on a line with his SONS!

Rating: No comparison. Also, doesn't he sort of look like Chris Cooper in that photo? Gordie Howe kicks ass. He might be hockey's Ditka.

* I would like to mention that I didn't forget Ken Dryden, who might be the only hockey player to ever leave the sport early...for his education. If you consider yourself a good hockey fan and even slightly enjoy reading, "The Game" is absolutely required reading. This is non-negotiable.