Kings Gameday: So Far, So Good: Part I

Share All sharing options for: Kings Gameday: So Far, So Good: Part I

The Kings suck. Our shutdown line is Michal Handzus, Raitis Ivanans and Mark Ellis. Our second line center is Derek Armstrong.* We're not good. Help is on the way, however. The Kings' lesser known prospects have been putting on a show recently, so I thought I'd highlight that. Turn that frown upside down, sally, we're taking a tour of the minors! First up: the WHL.

*I want to nickname him "Dump;" one, because all he ever does is dump the puck, and two, because his presence on our second line makes me feel like someone is taking a dump on my brain.

The Kings dominated the Western Conference First All-Star team, with Kings' properties taking up half the roster. Oscar Moller, Thomas Hickey, and TJ Fast were all named to the team. Moller and Hickey were both relatively expected but Fast was a bit of a surprise. He's older than everyone else in the league (he's 20 and was picked in 2005), but it's still an accomplishment for him. Bud Holloway was not named to either team, despite leading his team in points and playing a solid all-round game; I think it's an anti-Bud conspiracy. He and Fast may move to the ECHL/AHL next year to continue their development, while I don't know with Hickey and Moller. They may stay in the WHL one more year (although they doesn't have much left to do except put on weight), or they may step onto the Kings. I have no idea. I probably shouldn't admit that. 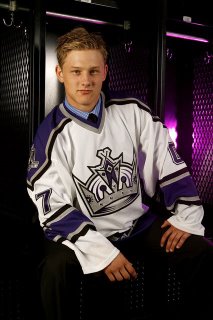 Moller kinda looks like one of the friends from Rookie of the Year.


Another surprise was the selection of goaltender Linden Rowat to the Eastern Conference First All-Star team. Rowat, a 5th round pick last year, had a 2.68 GAA and a .904 SV% and led Regina (teehee) to the playoffs. I normally wouldn't think he was anything special, but since Dean Lombardi drafted him, I'm going to go ahead and congratulate Calgary on their new Vezina-winning goaltender. Just give him 6 years.

The Manchester Monarchs defeated the Portland (Maine) Pirates last night, winning by a score of 2-0. The Monarchs are on a 3-game winning streak and currently have a hold on the final playoff spot in their division. They are a very young team; AHL teams are allowed 5 "veterans" on the team and the Monarchs have none. They've managed to win in spite of that (and in spite of the fact that Dan Cloutier was their goalie for a while) and should hopefully make the playoffs.


I'm intrigued by 2 players on the team: Trevor Lewis and Marc-Andre Cliche. Lewis was drafted with the pick the Kings got for Pavol Demitra. He was projected as a 2nd line center not too long ago but has struggled to adjust to the AHL game. Still, he has a good all-round game and could hopefully slide into a stopper role for us. Cliche (20) was obtained in the Avery deal and is good friends with Jonathan Bernier. He is the holy grail of players, a Sammy Pahlsson type, and has played very well since returning from an injury. These 2 are probably the next in line behind Boyle and Purcell in terms of players who could one day have a significant impact on the Kings.

Prediction: None of those players are here yet. Kings lose, 3-2, with goals by Handzus and Frolov. (I don't know why we haven't been scoring; maybe it's because we have Kopitar, Frolov, and then pbbbbt.)