I write for a blog, and as part of that I'm required to love Alex Ovechkin. (I'm also required to kill 1 person of Eric McErlain's choosing.) Last night on Versus, they showed a little thing about Ovechkin and a few other Capitals tooling around on Segways and it was hilarious. Here's a little clip:


So, as you see, I love Alex Ovechkin. But lately, Ovechkin has been pissing me off. He had a hat trick last night to bring his goal total up to 52 on the season, and I just realized that Alex is dangerously close to breaking Luc Robitaille's immortal single-season record for most goals by a left winger. Robitaille, of course, set the record in '92-'93. Wayne Gretzky was injured for about half that season, so Luc carried the team (with an assist or 60 by Jari Kurri). I can't hear the number "63" without automatically thinking about Luc Robitaille and that beautiful Cup run that culminated with Los Angeles' victory over Toronto. (Nothing happened after that, you hear me? Nothing!!!) If Ovechkin takes that away, I may not be able to like him anymore. 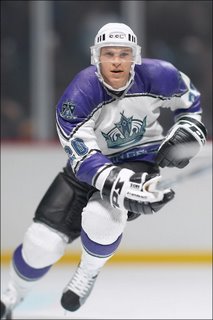 Note: May not actually be Luc Robitaille


But Ovechkin seems like a cool guy, so I'll make him a deal: stop scoring goals so much and I won't have to hate you. Score, like, 60 goals. That's very respectable and absolutely nothing to be ashamed of. Leave Luc with the record. Leave me with the record. Please?


Brian Hayward was in rare form last night during the Ducks-Senators game. When he wasn't bitching that Marty Turco was one of the NHL's Players of the Month instead of Giguere (and he has a point, but who cares?), he was harping on the size of Martin Gerber's pads. John Ahlers got in on the action, at one point saying (paraphrase), "Is it possible that Gerber's pads are so voluminous, that he can't feel the puck, is that something that's... (5-second pause) ...Niedermayer passes out of the corner..." Martin Gerber has large pads, huh? I wonder where he could have learned that little trick... 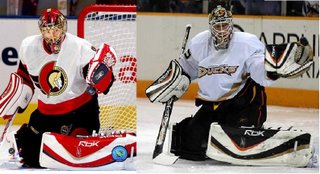 
Oh wait, there's a game today. Umm, the Kings have been losing a lot despite the play of the young guys, and Jack Johnson almost killed a guy. The Blues suck, they're in 14th in the West, Paul Kariya is a douche bag, blah, blah, blah.