Kings Gameday: What's Up With Vancouver?

Share All sharing options for: Kings Gameday: What's Up With Vancouver?

Can someone help me out? Usually when we play a Canadian team I like to make fun of the area (because I'm a winner), but I don't really know what's up with Vancouver. I've heard that they're more cosmopolitan than the rest of Canada (they don't wear denim on holidays?), but I've also heard that about Montreal. What's their deal?

Even their team is kind of boring. They don't score very much, the Sedin twins look like the most boring people in the world, Luongo is great but he's mostly just huge, Matt Cooke got traded, etc. Hell, I can't even be angry that they're better than us since they haven't beaten us this season! I can't make fun of them, and I hate that. The only thing that really made me laugh was during the trade dealine when I heard a few of their fans saying they didn't need defense because they had Aaron Miller and Mike Weaver. (Trust me, you guys need defense.)

Anyway, if you've been to Vancouver or if you just don't like them because you're bitter, let me know in the comments. 'Til then, I'll just have to keep noting that Roberto Luongo looks like a Bond villain, but even that's not that much fun.

The Kings had their big Breakfast with the GM extravaganza yesterday and Dean Lombardi talked a lot about the future of the team. Big points: he didn't sound too excited about Stamkos, he wasn't thrilled with last year's free-agent signings, and he wants a young defenseman this off-season. If you feel like it, go over to letsgokings.com's message boards to read a transcript.

Update: Pop quiz, hot shot: what sport is this passage talking about?

"Alberta's Kevin Martin took advantage of a Saskatchewan miss to steal a crucial early point in a 7-4 win that handed Pat Simmons' rink its first loss at the Tim Hortons Brier on Monday."

Hint: This Adonis is Kevin Martin: 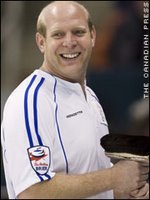