The power of the internet compels you

Share All sharing options for: The power of the internet compels you

In the 50th comment of last post, Scarlett Ice’s Sherry posed this question, in response to my comment that Pronger’s forthcoming suspension (expected tomorrow) was the result of "nice whining."

So as fans of the game, why shouldn't we whine about it? Isn't that part of what blogging is about?

Sherry, believe me, I've been whining all day, just in my own cynical way. And frankly, I’m really impressed that the NHL could be this swayed by pretty much the internet alone (I don't think the Canucks did or said anything, did they?). Score one for the web opinionists, especially if the overnight swing goes from 0 to 10 games for Pronger's stomp. Because frankly, while there was a clearer YouTube offered today, I have to say that I didn't see anything particularly new. It was certainly focused and to a degree more compelling, but it still left me with the possibilities I saw yesterday. At best, he’s freeing his foot, and at worst, he hopes Kesler never skates on two legs again, and it’s tough for me to expertly decide. But I don’t want to get into that debate here—keep those Pronger-opinion comments in the post below. 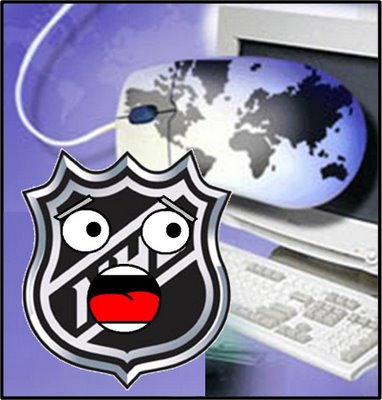 This post is to marvel at the power of a united hockey internet. While the unveiled video may offer an official excuse for Colin Campbell to change his position, I’m not falling for that explanation. Instead, I’m going to associate every one of these new suspended games to the growing power of the internet outcry, and it’s a pretty special thing to see. Journalists, message-boarders, bloggers, and commenters all chimed in very strongly with a loud cry for justice, and wow it seems to be getting results. The league seems to be listening. Even if tonight’s decision goes against everything I’ve personally been preaching, I don’t know if I’ve ever been as proud of the hockey internet as I am tonight. It’s just fascinating to see a cumulative voice of the fan make change in an often-stubborn league.

Congratulations, hockey internet. You may have just become a force tonight, and I’m glad to be around to see it.

Still, I have to maintain a little smugness around the whole StompGate affair (it is after all my main character flaw): Again, good work, hockey internet. Someday I hope we'll be whining our way to change on the same side of an issue.