Share All sharing options for: Sharks vs Edmonton Oilers photos 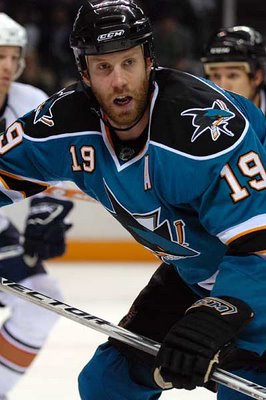 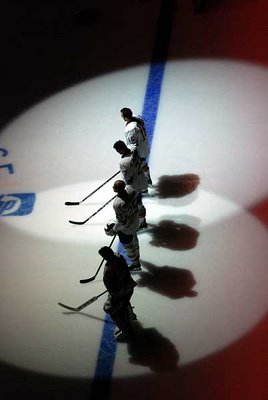 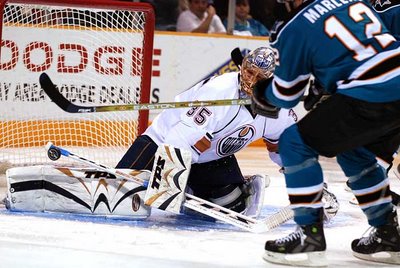 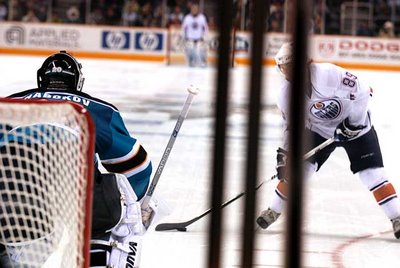 Here are a few photos from the Edmonton Oilers 2-1 OT shootout win over the Sharks on Sunday, sorry for the poles in one photo but I thought it would be a different look at the shootout. More photos here.

Had a long discussion with an usher about Dwayne Roloson's style of play in the first period vs his play against the Sharks in the playoffs, and about Edmonton's chances of leapfrogging Phoenix, Nashville and Vancouver. We were directly behind Matheiu Garon, who was banished to the island where visiting goaltenders watch the game. I should have added that the Kings failure to sign Garon was a Pacific Division mistake second only to Anaheim's early Christmas present to Phoenix in Ilya Bryzgalomite.

The Sharks first period against Edmonton was an impressive one, 19 shots on goal and several quality scoring chances. The second period I was at ice level and San Jose came out flying. Within a minute there was a pile of bodies around the Edmonton crease, and an Oiler defenseman tried to push the net off its moorings to regain their composure. The power play unit of Marleau-Thornton-Cheechoo-Campbell-Pavelski could possibly be the best 5-man unit the Sharks have ever iced. Quick, hard passes down low by the forwards, and great puck movement up top by the defenseman created a lot of room for players to get open, but there were not enough point shots on net. More point shots will create more rebounds and more havoc, and the Sharks will start putting up the power play numbers again.

The Edmonton penalty kill was a force in the third period. Three horrible penalties taken in the latter half of the period, a tripping call on Gilbert, a hooking call on Stoll, and a delay of game call on Roloson. A determined effort from a very quick Edmonton penalty kill unit deserves credit for keeping the Sharks off the board. Roloson stoned Joe Thornton on a 2-on-0 in overtime, and then quickly hugged the post to shut down a hard shot from Brian Campbell, who tossed his stick after the play.

Fernando Pisani scored the decisive shootout goal for the Oilers, he froze Nabokov on his forehand, and then took it backhand and lifted it over Nabokov's stick 5-hole. The Edmonton Oilers announcers called the move before he took the shot. Graphic on Versus said that the Oilers are 15-3 in the shootout this year. Tale of tape on this game is about as close as it gets, both teams were only able to score on 5-on-3 power plays, and 3 rounds of the shootout were not enough to decide a winner.

The 11-game winning streak is over for the Sharks, but the points streak is alive and well at 12 games. Prediction tomorrow against Los Angeles: Sharks general manager announces the surprise signing of 68-year old former Chicago Bears head coach Mike Ditka Tuesday morning, and the Ditka-Sharks shut out the Kings 24-0.