What to do about Stompy?

Share All sharing options for: What to do about Stompy?

Ah, Pronger, you magnificent bastard, you certainly have a way of pissing off the world, don't you? Fans and imaginations everywhere have chastised the NHL's soft policy on "suspending Chris Pronger", apparently for not having the same level of YouTube clairvoyance as your average Pronger-hater. Whether or not Pronger intended to sidestep or stomp a fallen Ryan Kesler, none of that can be answered on the video without a major dose of assumption ("Well, if you know that Chris Pronger always tries to hurt everyone, then it's conclusive"). While I know that sort of assumption is fine for Pronger-haters, it's certainly not good enough for the league's disciplinarian to act on, especially for a high-profile player like Pronger. Pronger doesn't even have a history of stomping; his suspensions in Anaheim have been about elbowing puck-carriers.

As Bob McKenzie notes, there's just not enough evidence in the video to suspend Pronger, just enough to suspect him. Still, there is whine across North America for Pronger's justice, so what's Colin Campbell to do? He could (and probably will) avoid the issue, but if he wanted to, he could take preventative action so that Pronger couldn't be off-camera on the ice again. Have a press conference where it's announced that Pronger will be on constant surveillance, so that any future suspendable brutality that "Pronger's always getting away with" won't be missed again. It's a win-win-win-win (assuming I somehow win too). 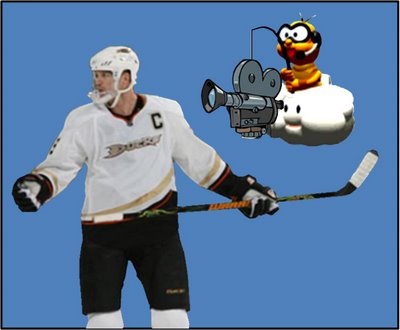 Gathering evidence for a suspension, one elbow at a time.

Note: The cloud-koopa technology shown here might not be available for several years, and the camera-on-a-fishing-pole idea might be ill-conceived. But the general concept still works.

Dedicate a camera to stay on Pronger for an entire game, no matter what city he's in, and allow overly agitated Pronger-haters to subscribe to that broadcast. Concerned "stomping watchdogs" can subscribe to these live feeds on a pay-per-view basis, and if they feel there's something suspension-worthy to report, they can call 1-800-TELL-ON-PRONGER and tattle with high-definition video evidence to a very sympathetic answering machine. All proceeds will help fund the cloning of Ryan Kesler's endangered leg.

ProngerCam--it may not appease the haters, but it's at least an active response to their bloodlust--yay or nay?