(Mike's note: I usually leave the cartooning up to Sleek, but this image just stuck with me.)

What's a picture worth? 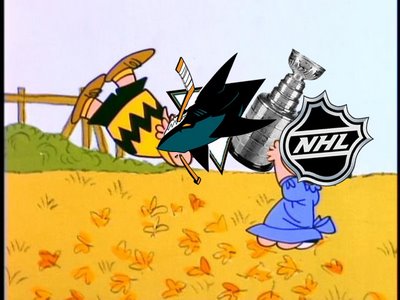 Update: Some people have wondered what the true meaning of this cartoon is. Well, I'm not blaming the league or officials or anything like that. All I'm saying is that the Sharks are making the same mistake over and over -- getting a lead, then playing a defensive shell that always fails, then panicking and forcing bad plays. Perhaps a more apt cartoon would be to make the Sharks as Lucy pulling the Stanley Cup away from the fans who believed the tease once again.