Are monkeys getting smarter?

Share All sharing options for: Are monkeys getting smarter? 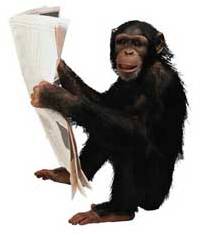 Well, my Ducks-Stars series preview is up at Fanhouse, and there's a good one from the Stars' angle at Knee Jerk Hockey; feel free to respond to either in the comments. In the meantime, I did want to point out that Maggie the Monkey has picked both the Sharks and the Ducks to advance past the first round.

Why's that significant? Maggie had an opportunity to pick a BoC team six times last spring, but all six series she instead picked the opposition. Damn monkey bias. Anyway, as I pointed out during those playoffs, Maggie was 1-5 in her CA-series picks, and 7-2 in series not involving the Ducks or Sharks.

So either (a) the Ducks and Sharks are screwed; there's nothing like the wet deathkiss of a monkey pick in a BoC series, or (b) this damn monkey is transforming into some sort of super-evolved smart chimp, capable of learning from previous errors, and should probably be locked up before its super-logic kicks in and it decides to eradicate humanity.