I'm pretty excited, because yesterday I finally got my new laptop from my new job, and it's pretty slick. I haven't yet hooked it up to the scanner nor have I uploaded all my old spreadsheets, but I guess there's no rush so long as last year's cartoons keep applying again this year. From the archives: 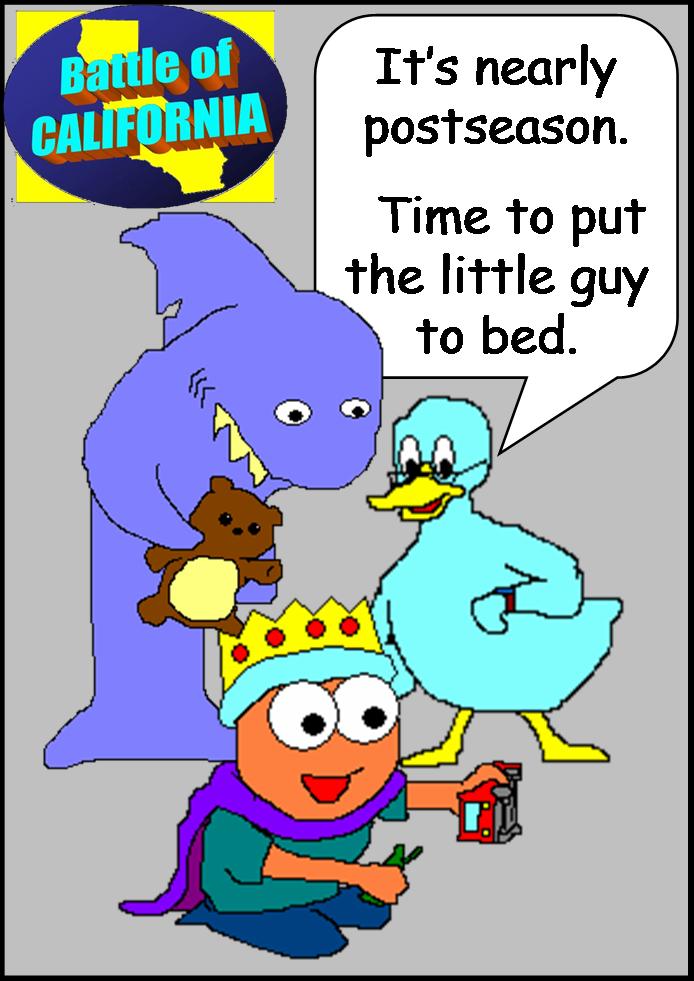 Rudy has the game covered below; I can't say it's going to be that meaningful a game outside of the Kings' lottery position, and for the Ducks one last chance to play without Chris Pronger. Instead, I'll take a quick glance 2 games into the future for the Ducks, now that the top 5 seeds in the west are locked in (DET, SJS, MIN, ANA, DAL).

Here's three things to know about this series:

1. Are two Conn Smythe Trophies better than one? This series will feature three of the last four Smythe winners (in fact, three of the six still playing hockey today): J.S. Giguere (2003), Brad Richards (2004), and Scott Niedermayer (2007).

2. Long time no see. This series is the first Pacific vs. Pacific playoff series in five years, when these two teams met in the second round of 2003. Since then, the Ducks have won seven playoff series; the Stars have won none.

3. Is Turco vs. Giguere as big a mismatch as it seems? These two goaltenders made their playoff debuts in 2003, but have had quite different results thus far:
* only includes series where the goalie started every game

While this fact-gathering is fun, though, there's also plenty of reasons to be scared shitless of the Stars; they've owned the Ducks for much of this year's season series, mostly played without Zubov or Boucher. But I'll be covering those reasons in another post.