Bright Side: Sharks on very long path to success

Share All sharing options for: Bright Side: Sharks on very long path to success

Yeah, yeah, Shark fans. I know it's been a rough three games, scoring first and watching the Stars deteriorate that lead. But take heart! All is not lost. There has been something very familiar about the Sharks' path this year, and I couldn't put my finger on it until last night. Winning a first round series in seven games, then on the brink of being swept in the second round; where had I seen that before?

Ah, that's right. The 1997 Mighty Ducks of Anaheim, playing in their first postseason in franchise history, beat Phoenix in seven games before bowing out to the Red Wings in four. And guess who was their head coach? A fellow by the name of Ron Wilson.

So if the Sharks end up losing tonight, don't fret. Here's what you do. Fire Ron Wilson, citing philosophical differences (just point out his self-contradiction in declaring that the Sharks needed to "relax" and "play desperate" in game three). Hire a guy like Pierre Page to replace RW, and you're set.

By my bar-napkin math, the Sharks are only ten years, six head coaches, four general managers, and one massive jersey re-design away from duplicating Anaheim's path to the Stanley Cup. Assuming the Sharks can hold to the pattern, a decade's not that long to wait for a taste of Lord Stanley's glory, is it? 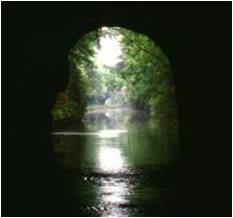 The light at the end of the tunnel?

Of course, if the Sharks win tonight, all bets are off. We shall see.