Cartoon Lessons from Spade: How to cope with Playoff Stress

Share All sharing options for: Cartoon Lessons from Spade: How to cope with Playoff Stress 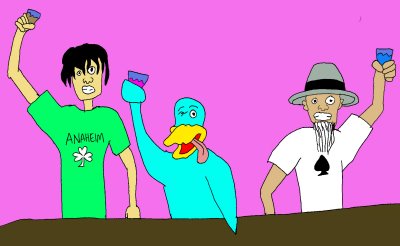 I know I said I was taking a week off posting (and I intend on following through with that now), but I neglected to post the awesome cartoon Spade sent me for use after the Stars series was over. He was of course hopeful that it would be used in victory, but I assured him that a drinking theme works for losing as well.

What's particularly impressive is that Spade met me only for a brief minute during a G2 intermission, and we were both pretty drunk. Still, he managed to capture my general tallness, my need for a haircut, and my maniacal "I'm going to kill you" facial expressions. Spade himself I think is well drawn, though when I met him I found it's tough to take your eyes off the impressive Jagr landing strip.

So cheers, Ducks fans. Winning or losing, sometimes it's all about coping.